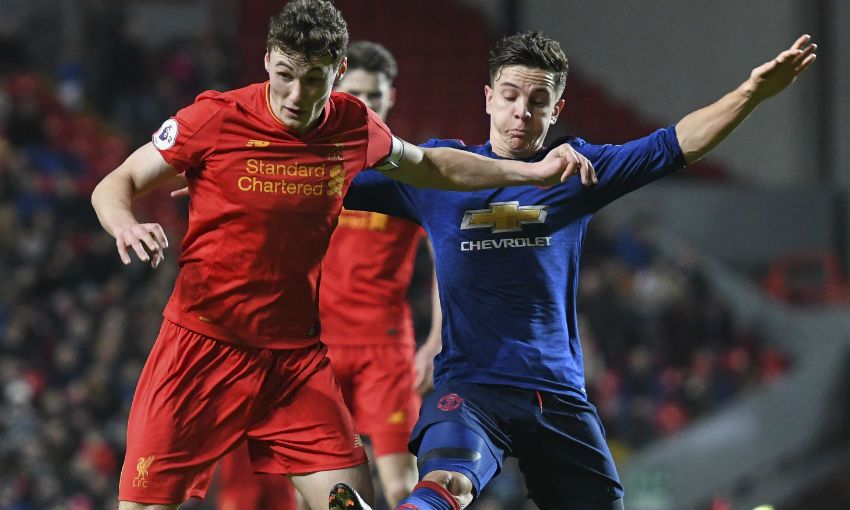 'Why keeping a cool head will be key for us tonight'

An injury-time winner from Manchester United's Matty Willock inflicted a 1-0 defeat on Liverpool U23s on their return to Premier League 2 action at Anfield tonight.

Shamal George appeared to have done enough to earn the young Reds a point when he produced a stunning save from Sean Goss’ penalty 14 minutes from time, but there was nothing the goalkeeper could do to stop Willock’s late, late header from point-blank range.

Mike Garrity’s side had controlled large parts of the second half after an evenly-matched first period, only for a lapse in concentration to allow Willock to ghost in unmarked and convert an inswinging free-kick from Goss in the game’s final meaningful passage of play.

The reverse represents only Liverpool’s second loss in their last 11 Premier League 2 outings, and they remain in third place in the table.

An excellent last-ditch block from Tom Brewitt denied United midfielder Willock the opportunity to test George with a quarter of an hour gone, but that was the only time either team had a sight on goal in a slow-burning first half.

Liverpool upped the tempo immediately after the break, with Brooks Lennon seeing a shot blocked and Jack Dunn firing wide into the Kop in quick succession in the early stages of the second half.

Lennon then scuffed an effort into the arms of United keeper Joel Pereira after good work down the hosts’ right by substitute Kane Lewis.

Further Liverpool pressure led to Pereira having to stop a goal-bound header from a United player following Dunn’s inswinging corner, and the visiting keeper was then alert to gather a speculative shot from Matty Virtue, who captained the young Reds with regular skipper Harry Wilson training at Melwood.

George was called into action when Callum Gribbin shot low after a United counter-attack, before Goss curled a free-kick over the Liverpool keeper’s crossbar.

Dunn saw appeals for a penalty waved away with 18 minutes to play and, just moments later, the referee pointed to the spot at the other end when Lewis was adjudged to have brought Gribbin down in the area.

George duly made an outstanding save to his left to palm Goss’ well-struck penalty wide, but his efforts were cruelly undone by Willock in stoppage-time.

LFCTV GO: Watch highlights of the Anfield clash with United