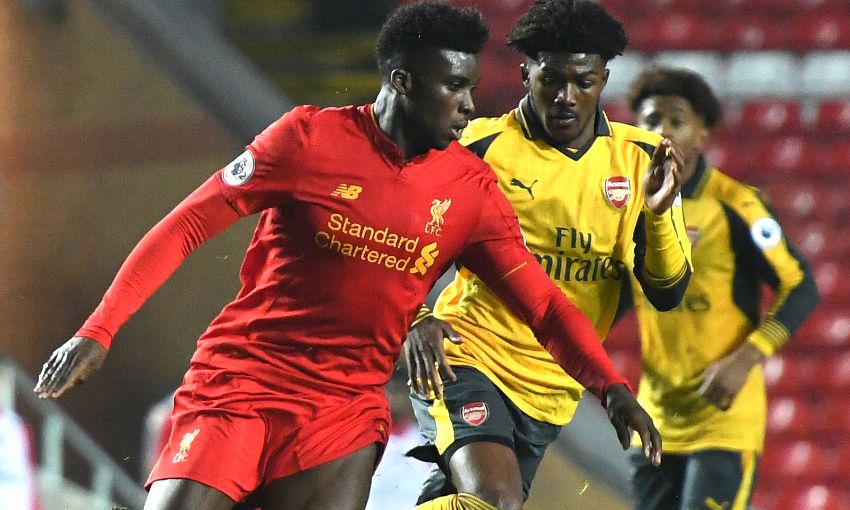 Sheyi Ojo fired his first goal of the season as Liverpool U23s beat Arsenal 3-2 at Anfield on Monday night and revealed the move that led to his strike was something he and his teammates have worked on in training.

The 19-year-old timed his run to perfection to latch onto Pedro Chirivella's precise through ball behind the Gunners defence before slotting home at the Anfield Road end.

It was Ojo’s first goal since netting for the first team against AS Roma during pre-season in St. Louis.

"It was great to score and that was what we have been talking about because for me one of the things I can improve on is movement in behind [the opposition defence],” Ojo told Liverpoolfc.com.

"I worked on it during training with the boys and thankfully the goal came from me running in behind, and it was a great pass from Pedro."

The England U19 international, who has missed most of the campaign so far due to a back problem, played his second 90 minutes of the season and enjoyed a lively outing on the left wing.

"It was good to get another 90 minutes again under my belt, I’m happy that the team won and it was nice to play at Anfield again," he added.

"It’s great to be back playing again. I was getting a bit of cramp in the last five minutes but I’m feeling stronger every game and long may that continue.

"In the second half we didn’t play as well as we could have but we battled on and we managed to see it through."

LFCTV GO: Highlights of the Anfield clash with Arsenal

2016 was a breakthrough year for the former MK Dons youngster. He made his first-team debut and scored his first goal in front of the Kop with a special strike in the FA Cup win over Exeter City.

He said: "I had some special moments and I’ll never forget that goal, and every day in training and in these matches for the U23s I’m striving to get back to that place again, and hopefully it will come soon.

"It was a great 2016 for me and I’m looking for another special year next year and I’ve just got to keep my head down and keep working hard."