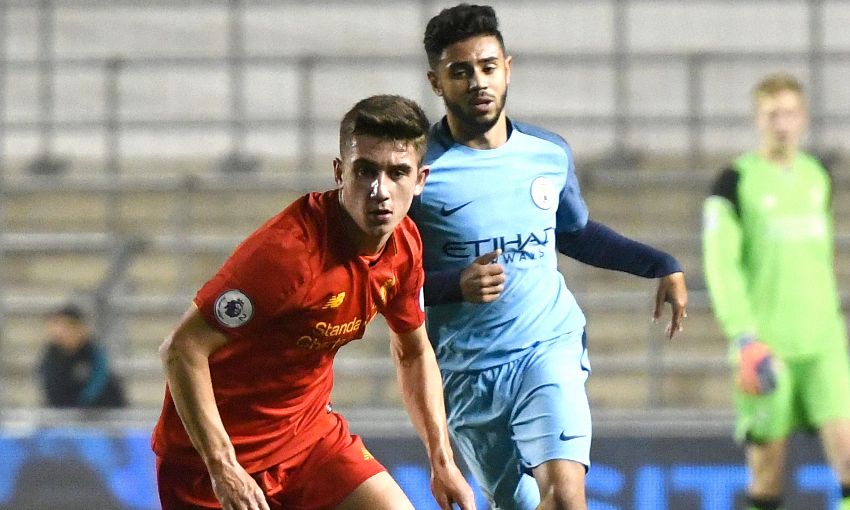 Liverpool U23s' unbeaten run in the Premier League 2 came to an end on Friday night as they went down to a 1-0 defeat to Manchester City at the Blues' Academy Stadium.

Paolo Fernandes struck in the first half for the home side, who would have gone in at the break with a bigger advantage had it not been for an excellent display by Reds goalkeeper Caoimhin Kelleher.

Liverpool responded in the second period with a spirited showing, but were unable to breach the City rearguard, meaning their six-game undefeated streak in the league was ended.

Fresh from their involvement with the first team against Tottenham Hotspur on Tuesday night, Trent Alexander-Arnold and Ovie Ejaria both began the encounter.

However, after Tiago Ilori saw a good early chance go awry from a corner, Liverpool found themselves behind on 23 minutes with the first attempt of real note on their goal.

Angelino’s raid down the left resulted in him feeding the ball into Brahim Diaz inside the area. In turn, he laid it off for Fernandes to stroke home first time into the bottom corner.

Having taken the advantage, the hosts upped the pressure on the visitors’ goal and after Diaz had struck narrowly wide from 20 yards, Kelleher was forced into a save to thwart Javairo Dilrosun.

The Reds’ goalkeeper produced an even better stop to deny Rodney Kongolo’s instant hit towards the bottom corner from Diaz’s centre soon after.

Kelleher was called into action once more prior to the break when he repelled Luke Bolton’s low drive from the right, ensuring the deficit was just one goal at half-time.

Michael Beale introduced Jordan Williams into the action during the interval and his side mustered the desired response, offering much more of a threat to City’s defence in the opening exchanges of the second period.

Indeed, on 65 minutes only a strong hand from Angus Gunn denied Alexander-Arnold an equaliser as the full-back whacked towards goal from an angle inside the box.

LFCTV GO: The best of the U23s clash with Manchester City

At the other end, Kelleher was required to deny Diaz on two seperate occasions in quick succession, firstly from a near-post flick before he blocked an attempt at close quarters after the Spaniard had skipped into the box beyond Ilori.

As the game ticked towards its conclusion, Liverpool continued to press for an equaliser, while City had chances to further their lead on the break, but there were to be no further additions to the scoresheet as the home team collected the three points to go top of the Premier League 2 table.