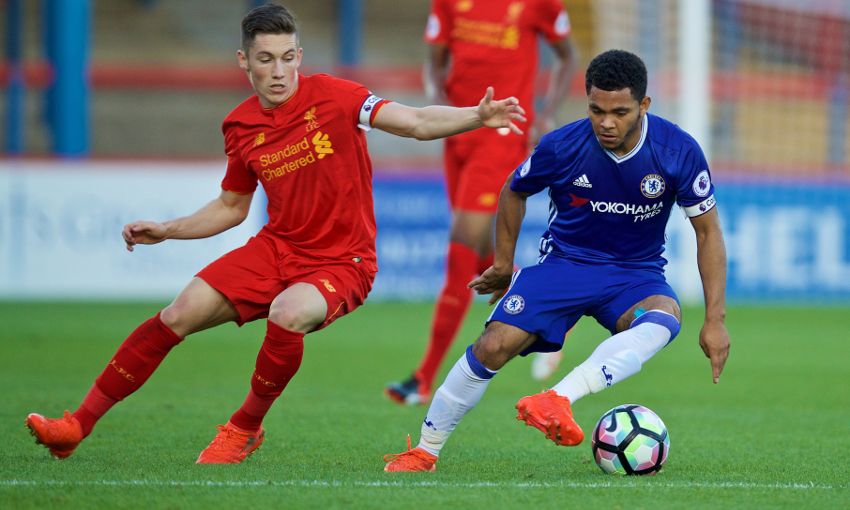 Liverpool U23s were beaten 4-1 by Chelsea in their Premier League 2 clash on Monday night after a flurry of second-half goals.

The young Reds reacted immediately to falling behind and levelled thanks to a stunning piece of technique from Harry Wilson, who found the top corner with a curler.

But within 10 minutes of the Welshman’s effort, the Blues had scored two more – and had a penalty saved by Kamil Grabara – to secure the points before a stoppage-time fourth.

The first half was bereft of genuine goalscoring chances for either team, and when the rare sights of goal did come they were for mostly for Chelsea.

As the young Reds were still adapting to the challenges of the opposition’s 3-5-2 formation, Mason Mount fed Josimar Quintero for a side-footer from 12 yards on nine minutes that was too weak to concern Grabara.

Kane Lewis breathed a sigh of relief on the half-hour as his sliding challenge on Quintero was deemed a foul – but just outside the penalty area.

Mount stepped up to the appealing set-piece situation, central and with either side of the goal to aim for, only to send a low finish into the wall.

The Chelsea No.7 was involved in much of their attacking play and he really should have scored in the 35th minute when found free inside the box, but instead clipped a shot wide after opening up space to shoot with a calm touch.

Having waited so long for a real spark in the game, it exploded into life with an hour gone.

The lively Quintero broke the deadlock in the 61st minute, tapping home a left-foot finish from an unmarked position in the centre of the area after being picked out by Dujon Sterling’s cross.

Liverpool’s response was practically instant. There seemed little danger as Joe Maguire pulled the ball back to the left corner of the box, but the space afforded him was enough for the captain, Wilson, to sweep a sublime strike over the ‘keeper into the top corner.

Parity was short-lived, though, and Mount was the man to restore the Blues’ lead on 66 minutes, redirecting Quintero’s wayward hit to leave Grabara stranded.

The Reds stopper prevented Chelsea from increasing their advantage moments later, brilliantly diving to his right to repel Mount’s spot-kick – awarded for a foul by Jordan Williams.

But the Londoners ensured victory in the 72nd minute when Sterling’s pressing forced a Williams clearance to loop into the air and the same player closed down Grabara and tapped in after the ball was spilled.

A harsh scoreline was confirmed two minutes into stoppage-time as Ike Ugbo neatly controlled a cross to the back post and drove a clinical shot into the net.