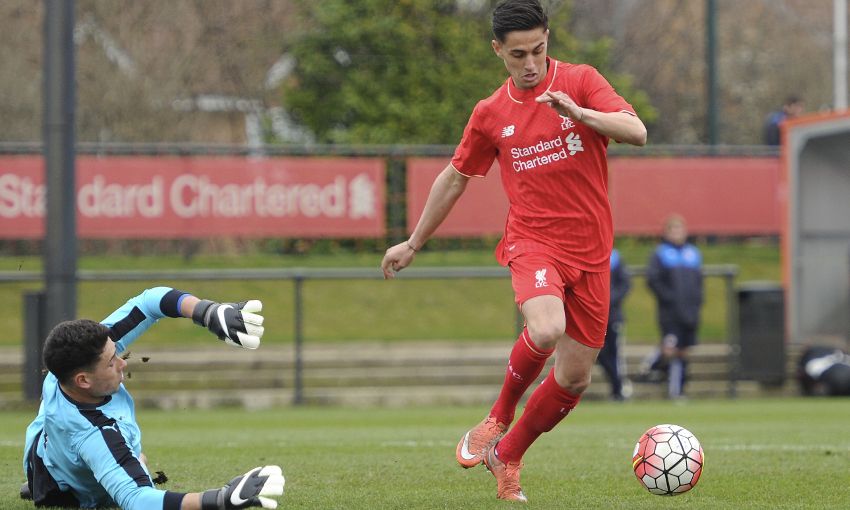 Liverpool U18s were somewhat harshly beaten 4-1 by Reading at the Kirkby Academy on Saturday afternoon.

After opening the scoring in the second minute through Yan Dhanda and going close to extending their lead in the first half, the young Reds were undone by a strong comeback.

The visitors were a different side in the second period and benefited from a penalty decision that the hosts firmly disagreed with, to completely alter the momentum of the contest and secure the result.

Neil Critchley’s team were ahead with 66 seconds on the clock.

Ovie Ejaria collected the ball midway inside the opposition half and upon lifting his head to look for the next pass forward, saw Dhanda drifting in from the right side and pointing to exactly where he wanted the ball.

His colleague found the gap between the Reading defence with a sublime assist and the forward took a touch, rounded the goalkeeper and fired a left-foot finish into the open net for 1-0.

Reading responded well to the early setback and pressured the Liverpool goal in the 10 minutes that followed, though the hosts threatened again on the quarter-hour.

Liam Coyle’s well-timed sliding tackle high up the pitch created a shooting opportunity for Adam Phillips, who whipped a curler over the crossbar.

The game settled into an even rhythm from there but the young Reds forged two promising chances to double their advantage in the minutes before half-time.

Phillips released Dhanda with a lofted pass only for Reading ‘keeper Luke Southwood to rush out and clear, before Paulo Alves drove an effort across goal and wide having been picked out on the right flank by Herbie Kane.

The 52nd minute was the turning point of the contest; Ejaria went close but off target with a clipped strike from 20 yards and the Royals were level within a matter of seconds.

Teddy Howe was the architect, speeding down the right wing and sending in a delivery that deceived the Liverpool backline, allowing Sam Smith to head home an equaliser yards out.

They went in front five minutes later as Tyler Frost thumped an unstoppable finish into the top left corner from the edge of the box once his initial shot was blocked.

Dhanda had an effort cleared off the line at the other end, and Reading soon increased their cushion when the referee judged that Shamal George had fouled Frost just inside the area. Smith converted the penalty.

The frustrating turn of events for Liverpool was completed when a defensive error presented Conor Davis with space to run clear and curve a side-foot finish around George.