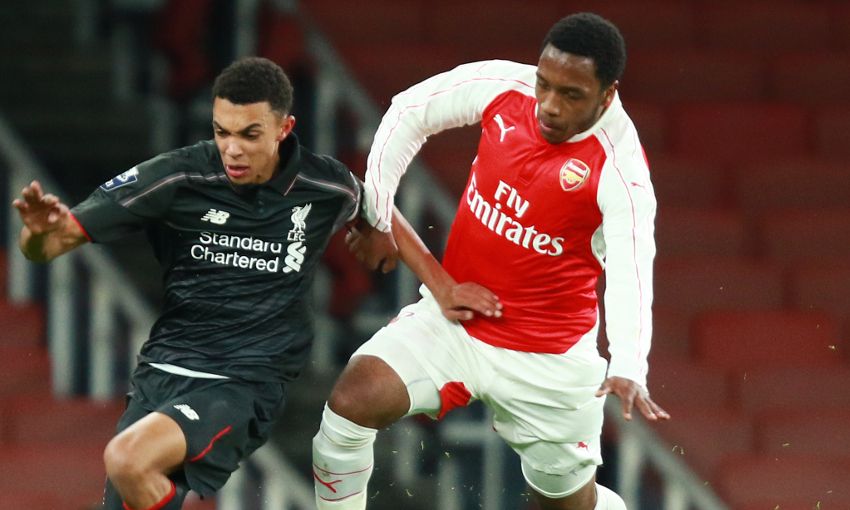 Liverpool U18s suffered heartbreak as they were eliminated from the FA Youth Cup after they were beaten 2-1 by Arsenal at the Emirates Stadium on Friday night.

Goals from Stephy Mavididi and Kaylen Hinds saw the Gunners edge out Neil Critchley’s side in a tight quarter-final contest.

Conor Masterson had pulled the Reds back level just minutes after the opener but the London side quickly regained the lead in an action-packed second half.

The defeat ends Liverpool’s impressive campaign in the prestigious tournament and they will miss out on a two-legged semi-final with Manchester City.

Critchley made two changes to the side that dramatically beat Nottingham Forest in the previous round, with Toni Gomes leading the line and Corey Whelan returning from injury.

The hosts started the game brightly enjoying lengthy spells of possession and came close to breaking the deadlock six minutes in.

Liverpool goalkeeper Shamal George had to deny Mavididi after good interchange play between the forward and Kaylen Hinds.

At the other end, Ovie Ejaria blazed over the crossbar from with a shot inside the 18-yard box before Adam Phillips tested Hugo Keto in the Arsenal goal for the first time.

The Gunners then went very close to taking the lead when Ismael Bennacer’s whipped free-kick from a dangerous position hit the top of the woodwork.

Steve Gatting’s side were in control of the first half. Whelan had to be brave in the heart of the defence to divert Hinds’ goalbound-effort for a corner as the Reds were soaking up Arsenal pressure.

The central defender was in fine form, despite making his first start since January after sustaining a serious ankle injury against Cardiff City in the fourth round of the tournament.

George was called upon again as full-back Ben Sheaf was allowed too much space and was able get his shot on target right before the interval.

The half-time break certainly helped the Reds and just three minutes after the restart, Gomes headed agonisingly wide from close range after relentless work from Brooks Lennon on the right wing.

Arsenal capitalised on the miss and made it 1-0 in the 51st minute through Mavididi who poked in from a corner.

However they weren’t about to hold onto their lead for long.

The young Reds went on the front foot in search of an equaliser and after a number of blocks by Gunners defenders from a Liverpool attack, the ball made its way to Masterson and the defender delivered a calm finish to level the tie three minutes later.

However their celebrations were short lived, when lapse defending allowed for the hosts to take the lead again.

Tyrell Robinson was given too much space near the touchline on the left to cross to Hinds who clinically fired home.

Mavididi thought he had made it 3-1 but he was only to be denied by the heroics of the Liverpool custodian. Hinds sent in an inviting cross for the Arsenal No.9 and his header that was destined for the back of the net led to George producing a wonderful reflex save to keep the Reds in the tie.

The hosts were looking to increase their lead. Adventurous right-back Sheaf hit an effort that went just post the left post before substitute Donyell Malen forced another save from George.

Liverpool were unable to break down a defiant Arsenal back four to force extra-time but Critchley can take solace from the heart and determination shown by his charges as they kept going to right until the death.