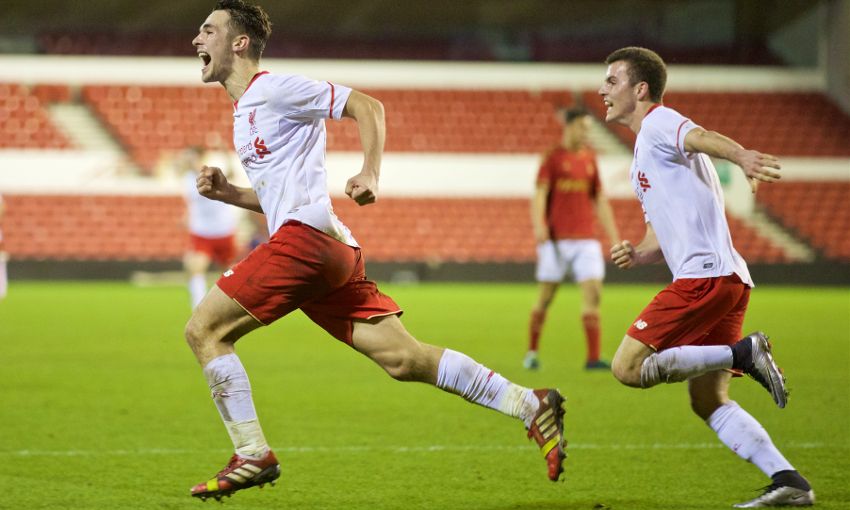 Liverpool U18s reached the sixth round of the FA Youth Cup with a dramatic 2-1 win over Nottingham Forest at the City Ground on Thursday night.

A 92nd-minute winner from Adam Phillips saw the Reds cancel out Adam Crookes’ late equaliser to put the Reds in the next round.

Herbie Kane had opened proceedings with his first goal of the season, after the midfielder slotted home following excellent work in the build-up from Brooks Lennon on a Liverpool breakaway.

The thrilling finale means Neil Critchley’s charges now face a trip to either Arsenal or Coventry City in the next stage of the competition.

Critchley made one change from the 3-0 victory over Cardiff City in the previous round as defender Mich’el Parker replaced the injured Corey Whelan.

Ben Woodburn returned to the starting XI following his wonder goal against the Bluebirds, along with Phillips, who had two assists that night.

In a slow start to the affair, the visitors came closest to breaking the deadlock. The 17th minute saw Phillips strike from long range with a powerful effort that was deflected just past the post of custodian Jordan Wright.

The partnership of Parker and Conor Masterson at the heart of the defence made the Reds solid at the back and difficult to break down.

Liverpool then had another chance when Phillips forced Forest to concede possession and passed to Woodburn, who had Ovie Ejaria making a threatening run ahead of him.

But the Welsh forward underhit his intended ball for Ejaria and the hosts subsequently recovered to clear.

On the half-hour mark, Ryan Yates rose highest from a corner but sent his header just wide, as the hosts were gaining more of a foothold in the tie.

However, the Reds grabbed the opening goal following a Forest chance. Ben Brereton was denied twice by two blocks from men in white shirts before Lennon counter-attacked with a brilliant, pacey run on the right wing.

The American shrugged off a defender and then crossed to find Kane in the box, who found the back of net when his cool finish hit the underside of the bar and went in.

Shamal George then prevented Forest’s Elvis Otim from levelling right before the interval with a good save from a strike outside the area.

Immediately after the break, the Liverpool goalkeeper then denied Otim again before Gerry McDonough went close with a looping shot at goal, as Liverpool were slow out of the blocks.

Half-time substitute Toni Gomes almost gave the Reds a desired two-goal cushion when he capitalised on hesitancy in the Forest defence.

The powerful forward ran towards goal before firing a stinging effort that was well stopped by Wright.

Liam Coyle, returning from injury, then replaced Ejaria midway through the second half in an attempt to shore up events in midfield.

The hosts had a great chance to level in the 70th minute when Brereton was through on goal only to fire wide.

Kane almost grabbed the important second goal when he went on a busting run into the box and saw his toe-poke effort on goal blocked before following up on the rebound and being denied by the ’keeper.

It was end-to-end in a frantic final 10 minutes. Substitute Liam Adams twice forced George into a wonderful saves before Crookes headed in from a corner two minutes from time, with extra-time looming.

But Liverpool had different ideas - Woodburn persevered with a mazy run and squared the ball for Phillips to finish, sparking jubilant celebrations in stoppage-time.