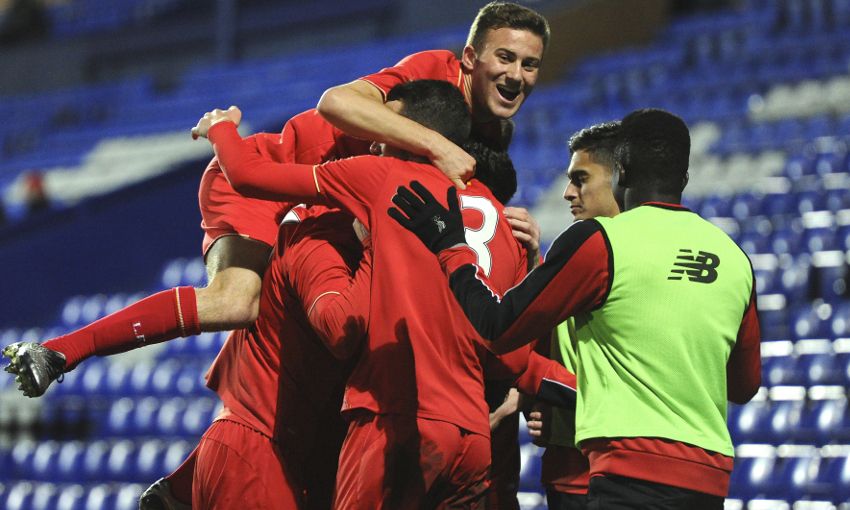 Kent: I need to keep showing what I can do

Liverpool U18s progressed to the fifth round of the FA Youth Cup with a brilliant 3-0 win over Cardiff City at Prenton Park on Wednesday night.

Goals from Ben Woodburn, Corey Whelan and Brooks Lennon saw the Reds advance on a cold night at the home of Tranmere Rovers for the fourth-round tie.

An exquisite finish from Woodburn in the 17th minute gave Neil Critchley’s side the lead before Whelan added the second goal of a dominant first-half performance.

Lennon then wrapped up proceedings late on to set up an away tie against Nottingham Forest in the next stage of the competition.

It was the home side who were dominant in the opening exchanges, applying pressure to a Cardiff team who were slow to get out of the blocks.

A good spell of possession for the hosts saw Paulo Alves play in Herbie Kane but the midfielder's delivery across the face of goal did not manage to find a teammate.

However, Liverpool did not have to wait much longer to find the back of the net as a long punt from the right hand side gave chance for Woodburn to chase.

The forward’s efforts were rewarded as he gathered control of the ball and then unleashed a wonderful chip over the onrushing goalkeeper.

City ‘keeper Luke Wakeman ran back to claw the ball from over the line, only for the referee’s assistant to correctly award the goal.

The Reds wanted the important second to gain a stronger foothold in the game and two minutes later they came close after Kane had a long-range effort that went just over the crossbar.

The Bluebirds then fired a warning shot of the threat they possessed while still in the contest.

Good play in midfield from Mark Harris saw him play an inviting ball through to Aiden Chappell-Smith and forced Conor Masterson to make a wonderful intervention and preserve the one-goal advantage.

Liverpool were in the ascendancy, though, and Lennon was prevented from making it 2-0 by a wonderful save from Wakeman, after the American forward capitalised on some hesitant defending in the Cardiff back four.

The visitors’ defence was visibly rattled by the dominance of the Reds. Kris Owens’ cross from an advanced position on the left almost led to Rhys Abbruzzese putting into his own net.

And Whelan then ensured Critchley's side took a deserved cushion into the break. The centre-back applied a cool finish to a free-kick that was invitingly whipped into the box by Adam Phillips.

The second half started off slowly but Alves came close to adding a third following a good exchange with Woodburn.

Cardiff were looking for a way to get back into the game and, on the counter-attack, Jamie Bird blazed well over having won possession and carried the ball from deep.

Hopes of a clean sheet could have been dealt a blow when goalscorer Whelan was carried off on a stretcher around the hour mark, following a challenge with Elvis Menayesse, and he was subsequently replaced by George Johnston.

Liverpool survived a scare in the 69th minute from a Cardiff corner which resulted in a mad scramble before going up the other end to force Wakeman into another stop after Woodburn’s effort.

Critchley will have been pleased with his team’s approach in the second half. Cardiff were left frustrated for long periods of time without the ball and forced to take shots at goal from long distances as a result of good organisation in their opponents’ defensive ranks.

And substitute Toni Gomes went on a weaving run in the 83rd minute before dragging his shot, allowing Lennon to tap in and seal progression.