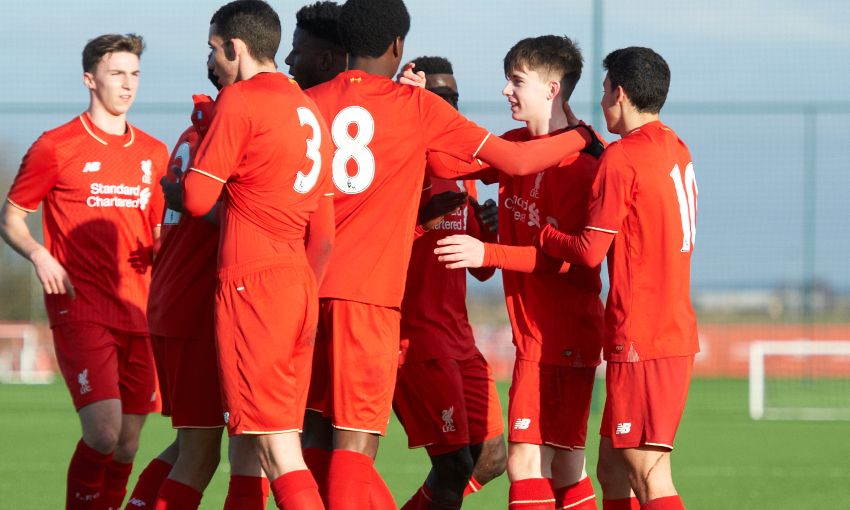 Ben Woodburn scored twice and provided an assist as Liverpool U18s produced a brilliant display to beat Manchester United 3-0 at the Kirkby Academy on Saturday morning.

After the 4-0 win over their arch-rivals in October, Neil Critchley’s side completed a league double, with Yan Dhanda also on the mark.

With the usual showpiece pitch deemed unplayable, the game was switched to one of the training surfaces at the Academy.

Critchley’s team featured the inclusion of Conor Masterson, who was on the bench for the first team the previous evening at Exeter City in the FA Cup.

With an FA Youth Cup fourth-round date with Cardiff at Langtree Park set for Thursday night, the U18s warmed up nicely for it with a fine display.

The young Reds nearly went in front inside the opening five minutes when an Adam Phillips free-kick found Masterson, but the Irish defender’s effort was cleared off the line.

Five minutes later it was 1-0 and a goal to cherish from 16-year-old Woodburn. Toni Gomes provided the cross and after a lovely flick from Paulo Alves, Woodburn found the net with a spectacular overhead kick.

Herbie Kane was unlucky not to make it 2-0 when he hit the post following a corner, while at the other end James Dunne also struck the woodwork when his header came back off the bar.

It was 2-0 after 36 minutes with Woodburn again on the mark. A superb run from captain Trent Alexander-Arnold down the right ended with his cross finding Woodburn, who slotted home.

Gomes might have made it 3-0 just before the break but he fired over the top after a great pass from Woodburn.

Substitute Dhanda, who signed his first professional contract with the club just before Christmas, then came off the bench to head home the third goal 12 minutes from time, after an assist from man of the match Woodburn.