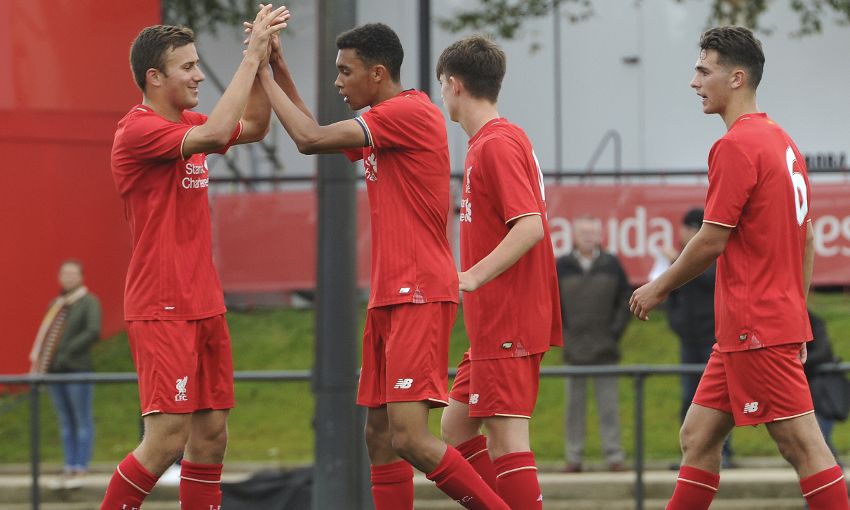 Liverpool U18s returned to form with a 2-0 victory over Derby County in Kirkby on Saturday morning.

Trent Alexander-Arnold scored one from a penalty and created the other for Ben Woodburn in the second period to secure a hard-fought result.

It was an even first half at the Academy and Paulo Alves would have hoped for a better connection when he scuffed a shot straight at the goalkeeper having been picked out by a George Johnston cross.

But the Reds did achieve a breakthrough in the 31st minute.

A lengthy, driving run through the middle by Ovie Ejaria carried him into the area and the referee immediately pointed to the penalty spot when he was bundled over by Kyron Stabana.

Alexander-Arnold stepped up to fire the spot-kick past the ‘keeper’s reach into the top left corner for 1-0.

The visitors returned for the second half with an attacking mentality and immediately caused concern for the Reds, notably going close through a set-piece.

But Alexander-Arnold turned provider to help Neil Critchley’s team double their advantage 12 minutes after the interval.

He dribbled forward with Derby exposed at the back and waited patiently for the right time to slip in Woodburn, who calmly directed a cool finish into the bottom corner.

And though Liverpool had to soak up pressure to preserve their lead, they did protect it well, with Conor Masterson especially hard to beat, and took the spoils.