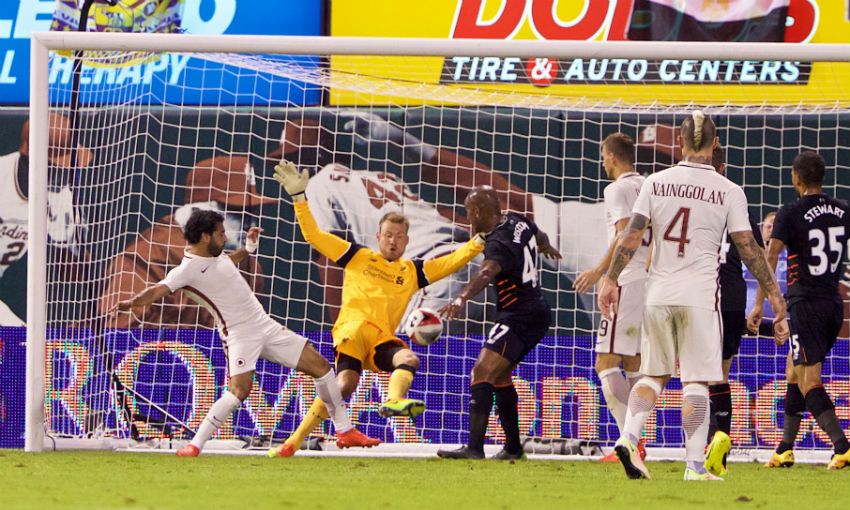 Liverpool's three-game tour of the United States ended with a 2-1 defeat against AS Roma at Busch Stadium in St. Louis on Monday night.

Goals in either half from Edin Dzeko and Mohamed Salah rendered Sheyi Ojo’s header in the closing seconds of the first period just a consolation.

The Reds, who had previously lost to Chelsea and beaten AC Milan on the trip, now head home for Merseyside and two final friendlies with Barcelona and Mainz.

The pre-match team news confirmed a first club appearance of the summer for Emre Can, while Alex Manninger was in goal as Jürgen Klopp made several changes.

Roma ignored the humidity of the evening to make an eager start to the game, including an early test of Manninger’s reactions when Stephan El Shaarawy sent a low strike towards the bottom corner.

A moment later, the goalkeeper would perhaps have been helpless had Nathaniel Clyne not recovered sufficiently to prevent Dzeko from making the most of Radja Nainggolan’s pass into the area. Instead, his shot went over.

The same man was thwarted on 11 minutes by Dejan Lovren. The No.9 had cut inside the Liverpool defender and created space but saw an effort take the slightest nick off his marker and glide inches wide.

Klopp’s men forged their first real chance on the quarter-hour as Sadio Mane threaded an excellent ball into Daniel Sturridge with freedom inside the Roma penalty area.

The striker’s first touch was ideal and the subsequent dink was goalbound – but Becker Alisson raised his right hand to the perfect position to stop it.

Dzeko did break the deadlock in the 29th minute, though. The former Manchester City man collected a knock forward, turned and drove an accurate, low hit from 20 yards across the reach of Manninger and into the net.

The temperature made an immediate response difficult but the teams did retire for the interval with the score level, courtesy of an equaliser from Ojo in first-half stoppage-time.

James Milner swung a corner from the left side to the back post and Lovren leapt to connect well and head in the opposite direction, providing the Reds youngster with the simple task of nodding home.

Klopp made 10 changes to his line-up for the beginning of the second half, with only Georginio Wijnaldum remaining from the XI that played in the opening 45 minutes.

One of those introduced, Adam Lallana, had a half-chance of putting Liverpool ahead but the Englishman was pressured into missing the target as he collected a cross from the left.

And Roma made Klopp’s charges pay by promptly re-establishing an advantage in the 63rd minute.

Simon Mignolet was able to keep out Dzeko’s close-range header after an inviting delivery from the right flank, but the goalkeeper was immediately beaten on the rebound by Salah.

The Belgian did ensure the match remained in the balance with a reaction stop from Federico Ricci’s daisy-cutter, only for Danny Ings to see the most promising opportunity with a glance from Philippe Coutinho’s free-kick saved.