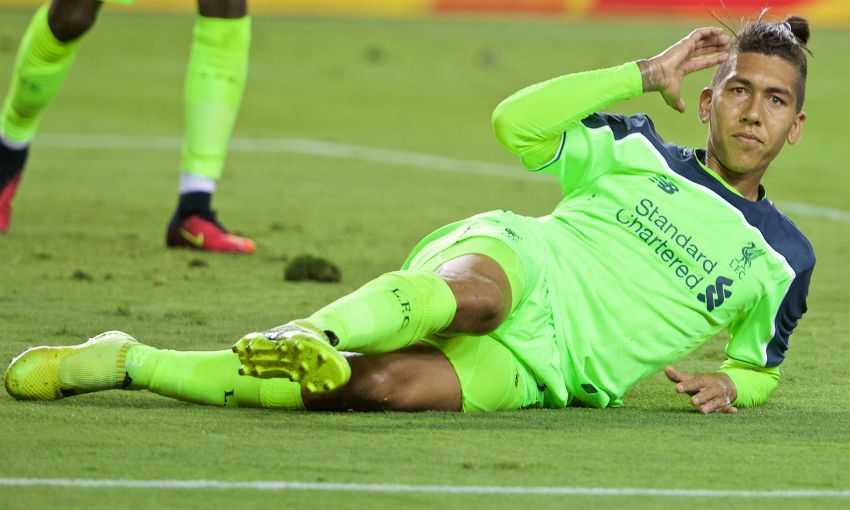 Liverpool returned to winning ways in their pre-season programme as they turned in an impressive display to overcome AC Milan 2-0 at the Levi’s Stadium in Santa Clara on Saturday night.

Divock Origi put the Reds into a deserved lead just before the hour with a finely-taken goal, collecting Alberto Moreno’s pass forward on the left of the box and firing into the far corner.

And the advantage was doubled soon after when Roberto Firmino reacted well to turn home Sheyi Ojo’s deflected shot from close range on the slide.

There were several further chances to add to their winning margin, but Liverpool will be highly satisfied with their work out in California.

The pre-match team news revealed Georginio Wijnaldum had been handed a debut by Jürgen Klopp, while there were also starting berths for Daniel Sturridge, Jordan Henderson, Adam Lallana and James Milner.

Sporting their brand new 2016-17 New Balance third kit, Liverpool began the stronger of the two teams on San Francisco Bay - Philippe Coutinho came close to converting Sadio Mane’s centre at the back post, while Sturridge had a curler blocked by the legs of Luca Antonelli.

The striker then threatened again just before the half-hour mark when teed up by Wijnaldum at the conclusion of a speedy counter-attack, but his attempt was thwarted by the lunge of a defender once more, this time in the form of Ignazio Abate.

On 38 minutes, the Reds opened up their opponents yet again with a slick move. Lallana’s touch, swivel and shot in the blink of an eye grazed the roof of the net, however, with Gabriel motionless.

They went closer still soon after when again Milan were prised apart, this time Coutinho’s precise pass released Mane into space on the edge of the area, but his low drive was deflected over the bar by the legs of the goalkeeper meaning the teams went in at the interval without a mark on the scoresheet.

Liverpool made several substitutions at the break, with the likes of Origi, Firmino and Nathaniel Clyne entering the action - and it was one of the half-time introductions that finally made the breakthrough on 59 minutes.

Collecting the ball on the left of the area, Origi bamboozled ex-Red Gabriel Paletta with some quick and nimble footwork before curling low into the far corner in an instant.

By this point, Klopp’s side were firmly in the ascendancy and after Origi went close again with a header, the advantage was extended with 73 minutes played.

Substitute Ojo demonstrated searing pace to beat Paletta to the ball down the right before cutting into the box. His attempt shot was deflected across goal, but Firmino reacted smartly to prod the ball over the line from inside the six-yard box.

The Brazilian was denied a second at the death when Gabriel saved well from his low effort after Milan failed to clear another Ojo centre properly, but Liverpool had already done enough to clinch a merited victory.