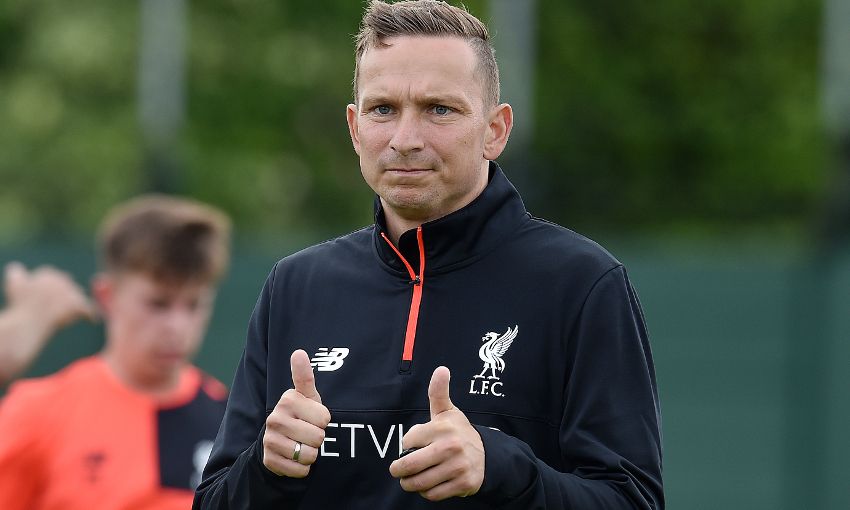 Even at the end of a thorough conversation, the Dutchman manages to surprise by demanding one more question, one more opportunity to share his enthusiasm and knowledge.

The first-team development coach, who stepped up from the Academy last summer, is certain that the methodology being installed at Liverpool will lead to success on an individual and collective level.

We start with pre-season and the much-talked-about training sessions being delivered under the sun in California. ‘Intense’ is the word most commonly used to describe them, both by those involved and those watching on.

“The main thing in this first period is that everyone starts making decisions individually because of the collective idea and references,” Lijnders begins.

“There’s a big development in that part. We are very clear in what we want: how we want to prepare pressing situations; how we want to move the ball gradually up; how we can advance as a team using the free spaces the opponent leaves in their organisation; our positional play.

“The intensity is high, because they start playing better together.”

The phrase ‘practice makes perfect’ springs to mind when you observe the exercises designed by Jürgen Klopp and his trusted backroom team.

With the German peppering the players with instructions as they work – flanked by the equally communicative Zeljko Buvac, Peter Krawietz and Lijnders – the processes are becoming fine-tuned and routine.

And that’s the plan. 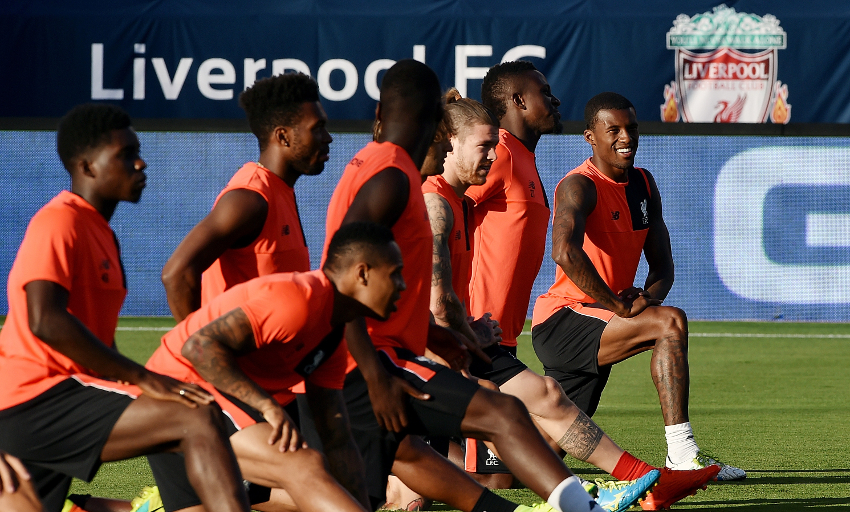 Lijnders explains: “There’s a saying that success is repeating a few disciplines, but really well and constantly.

“It’s repetition but we don’t want a linear or mechanical style of play. That’s why we focus on principles and the principles are basically tactical patterns which give the individual stability in an unpredictable game.

“You saw against Chelsea that it was permanently unstable and we want them to make it more stable because of the focus on those principles and tactical patterns.

“But the creative development takes time because we don’t want to make it linear or mechanical. So it takes longer.

“It would be easy to say ‘A, B, C’ but football doesn’t work like that, especially in our situation with Liverpool FC having so much talent. We want to give them the freedom of expression to be constantly unpredictable and constantly searching for limits, a constant gain of individuality in that collective identity and way of playing. Where it’s very clear as a collective how we want to approach each single game.

“The exercises have character because it’s a direct reference to our way of play.

“The way of play is basically like a lighthouse guiding us as coaches, prioritising and creating specific exercises towards creating that common goal and common idea between players. That gives the players stability.”

It also goes some way to explaining why the young players who have been given a chance to impress this summer have made the step up to senior duty with such composure.

Ovie Ejaria, for example, has been unruffled by anything to date, including an appearance in front of 53,000 people at the Rose Bowl.

The same goes for Ben Woodburn, whose pair of goals against Fleetwood Town and Wigan Athletic gave the 16-year-old a ‘golden’ jump in development according to Lijnders.

He would know too, having worked with the boys during his time in Kirkby and since.

“We have so much talent in our Academy and so many players who need guidance,” the coach, perched forward on his chair, states.

“You see what happened in three or four weeks with Ben Woodburn, Trent Alexander-Arnold and Ovie Ejaria – that’s gold in terms of development because that’s probably half a year of development in the Academy.

“Just because they see Phil Coutinho using the free spaces, they see Adam Lallana turning and protecting the ball. Trent sees how Emre Can drops into the defensive line to circulate the ball to get higher as a team.

“It’s interesting because indirectly we also want to influence all the other boys who stay behind, because they see it’s possible.”

Lijnders speaks with an energy that reveals just how consumed he is by the game and the opportunity to set players on a career path that could reach the elite level.

You would struggle to guess that only two days before the Reds departed to America for their ongoing tour, he witnessed the birth of his son Benjamin and became a father for the second time.

“We are all professionals,” he says when asked whether being away from home is difficult, while the prospect of leaving a long-term legacy helps too.

“Many people say it, but we really believe in development and are doing it.

“It was an amazing statement from Liverpool to give Jürgen a new contract, but what we’re doing now in this moment will influence this club long afterwards.

“Take Ben Woodburn, Trent or Ovie – this is part of the culture to bring in our young players to compete with our top talent. To be able to compete at that level, you need a quality set-up and organisation of really high standards. They’ve shown we have that because they can compete and they do compete.

“One day, they will win the competition and play. We truly believe in this. It takes time, like any development, but it will be worth it.”