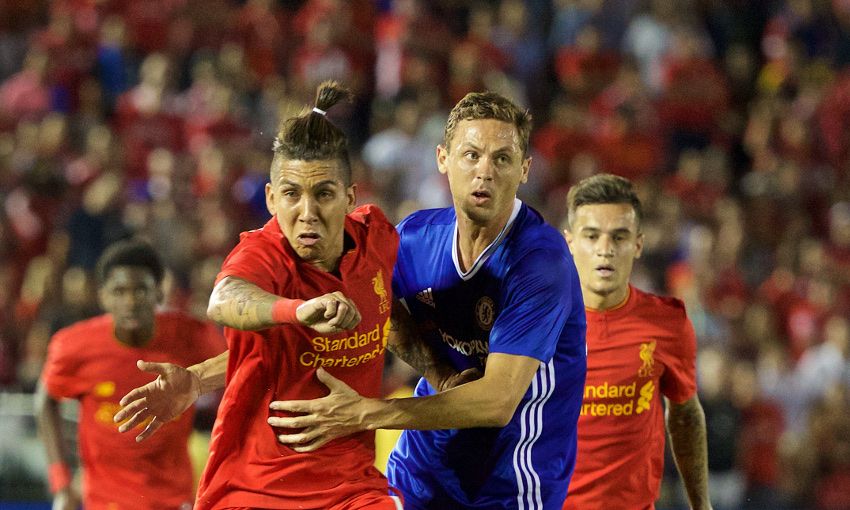 Liverpool's International Champions Cup participation began with a defeat as Chelsea claimed a 1-0 result at the Rose Bowl in California on Wednesday night.

An early goal by Gary Cahill put Antonio Conte’s side ahead in front of 53,117 fans at the iconic stadium, which hosted the 1994 World Cup final between Brazil and Italy.

Roberto Firmino had a strike ruled out for offside and the Blues played out the final 20 minutes with 10 men due to a red card for Cesc Fabregas, but the Reds could not produce an equaliser.

It meant a first defeat this pre-season for Jürgen Klopp’s charges, who had won all four of their previous runouts this summer without conceding a goal.

Chelsea opened the scoring in the 10th minute through Cahill.

Fabregas spun a corner into the penalty area from the left side and the England centre-back got a run on Marko Grujic to climb high and nod a header down into the bottom corner.

It took the Reds time to grapple back any control in the game but when they did, only an excellent save on the stretch by Asmir Begovic prevented Philippe Coutinho’s swerving free-kick from finding the net.

The Brazilian was involved in creating a half-chance shortly after but when Alberto Moreno reached his through ball and crossed into the middle, Firmino was dispossessed.

Firmino appeared to have brought the Reds level on 35 minutes, only for an offside flag to cut short celebrations.

The No.11 was released into the box by a clever Ovie Ejaria backheel and instantly sent a finish past the goalkeeper. A brilliant strike but ruled out by the linesman.

Klopp made a single change at the beginning of the second half, with Adam Lallana on for Grujic, who had suffered a nasty collision and landing moments before the interval.

The Reds made a bright start upon the resumption but were threatened when Ruben Loftus-Cheek spun into space 30 yards from goal to meet a knock forward.

Dejan Lovren took a yellow card for bringing the attacker down and Willian clipped an effort too high from the subsequent set-piece.

The centre-back was left prone on the turf minutes later, having been caught unintentionally as Loris Karius rushed out to punch away a Chelsea free-kick, and had to be replaced as part of six changes.

Andre Wisdom took up his spot in defence, while Jordan Henderson, Danny Ings, Lazar Markovic, James Milner and Sheyi Ojo were all introduced too.

Chelsea were reduced to 10 men in the 70th minute, Fabregas the man shown a straight red card for a dangerous, lunging challenge against the ankle of Klavan.

The Reds enjoyed much of the possession in the time remaining but were kept at bay by some resolute defending and will now hope to bounce back when they meet AC Milan on Saturday.