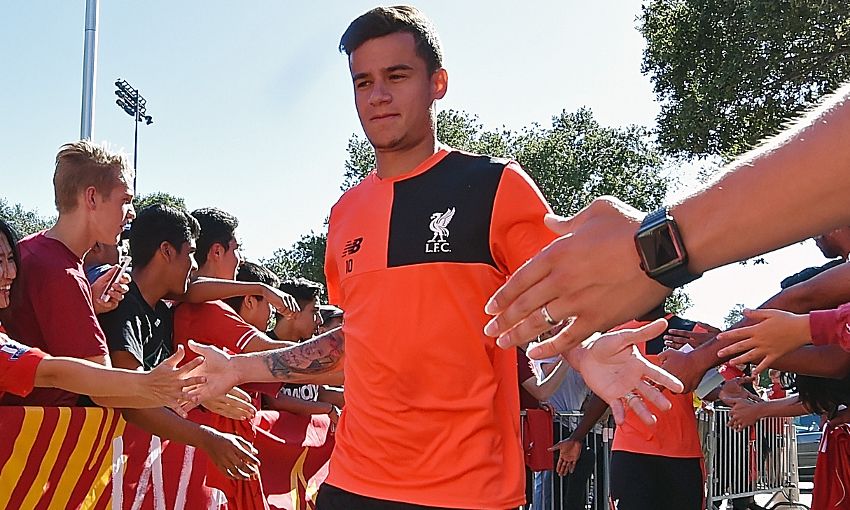 Philippe Coutinho is relishing the prospect of supplying Sadio Mane and Georginio Wijnaldum with the ammunition to supplement their firepower this season.

The duo have both been added to Liverpool’s ranks over the course of the summer so far, and the Reds’ No.10 is eager to link up with them in 2016-17.

Coutinho has already played alongside Mane in the friendly victories over Wigan Athletic and Huddersfield Town, while he is awaiting his first appearance alongside Wijnaldum.

The Brazilian told Liverpoolfc.com at the team hotel in California: “I am looking forward to playing with them.

“They’re both very good players and fast players, so maybe you can pass a long ball and they’ll arrive to it. But it’s not only them, the squad is very good and there are a lot of good players. I hope we can all do a good job together this year.

“There are a lot of players now and there is good competition in the squad, which helps you to get better and helps the team.

“It’s been very good playing with Sadio so far, but if anything he’s too fast! That’s good because you need this in your game. Everyone is very happy with him – he is a nice guy and very good player.

“[The new signings are] very good for Liverpool and the squad because there is good competition to play. Everybody wants to be involved and that’s good for the club.”

The summer of 2016 marks three-and-a-half years since Coutinho arrived at Anfield from Inter Milan.

Despite being just 24 years of age, his 145 appearances make him one of the players who’ve represented the club the most within the current squad.

“I feel young!” he smiles. “I always try to be myself, I don’t think I am an experienced player because I am always trying to learn from every player and every coach in the squad.

“The time has passed very quickly since I moved to Liverpool and I am very happy because this is a great club. Now we have some new players and let’s see what happens this season.”

Coutinho’s desire to learn isn’t simply an interview soundbite – the Brazil international reveals he will often study video footage of his performances after a game to examine areas in which he feels improvement can be made.

“Sometimes I will watch my performance after a game and I will look at what I can do better and improve,” he explained.

“And, yes, of course I can still improve. I always want to be better and to improve. I am here to learn more things and make my game better to help my teammates. I hope this season will be good for us all.

“I think I can improve on everything in my game. 'You always have to improve' – that’s my mentality. What in particular? If I could score more goals and create more chances it’d be nice.”

Coutinho added: “I am confident for this season. I think everyone feels confident. Last season we had some opportunities but couldn’t take them.

“That has made us stronger and now we are hungry to win titles and to be able to fight.”

Wijnaldum: You'll Never Walk Alone is something you never forget