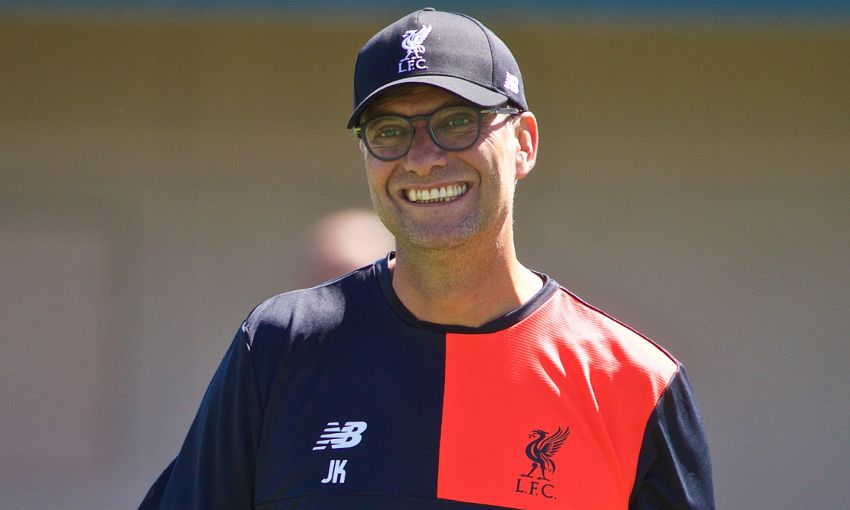 Jürgen Klopp has revealed that preparations for Liverpool's first Premier League game of the season can begin in earnest, with the tour of the United States now in full swing.

The Reds had already played out four pre-season fixtures prior to jetting across the Atlantic Ocean on Wednesday evening, earning as many wins in the process.

But several players whose international commitments extended their holidays have since returned to the fold, while those who flew out to the US have begun to acclimatise to their surroundings.

And for that reason, the boss is now ready to start stepping up the effort to ready his squad for a trip to face Arsenal at the Emirates Stadium on August 14.

"They have to pay a little bit of attention to the jet lag. I slept okay last night and on the plane it was okay. I can’t ask each player," he told Liverpoolfc.com.

"We trained twice yesterday but it was not too high intensity, this morning was only a little bit of running and this afternoon it is a little bit more football. From tomorrow on, we can do the normal stuff.

"Until now, I haven’t had a lot of meetings because we have missed a lot of players so it doesn’t make too much sense to always say the same things.

"I have a few things to say, for sure, but for all players. So we were waiting a little bit and now we can start with this. We can talk more about tactics.

"We have spoken a lot about tactics and I have been really pleased with how we have done it until now. Everybody could see the wonderful signs of our young boys.

"A few things will happen with going on loan or selling, and we are not finished of course – we still have to do this work. But on the other hand we can now really start working on the things we can use for the Arsenal game."

LFCTV GO subscribers can watch Klopp speak on Arsenal above

Klopp has boosted his ranks with the acquistion of seven new players ahead of his first full season in charge at Anfield.

Marko Grujic and Joel Matip have joined up with the squad after finalising moves that were put in place earlier this year, while Sadio Mane, Ragnar Klavan, Loris Karius, Alex Manninger and Georginio Wijnaldum have all sealed summer switches.

The manager is now looking forward to blending his new players with the old ahead of what he hopes will be a successful campaign for the club.

"Of course I am [excited]. But I think most of the other teams are in similar places and have made some transfers they like and are satisfied with the team they have. That’s the only problem I have," he added.

"But I am quite excited about our situation. We will be ready for the season, 100 per cent. We are really looking forward to it.

"We will fight for everything and we will challenge everybody – that’s the plan. We will use this time to train and we will really try to build a real team and group. Each player is important for this.

"So they need to be ready for the challenge, the new players and the players we had already.

"They have to challenge each other but they can still be best friends, because it’s not about being better than him, it’s about being the best you can. I’m quite excited."