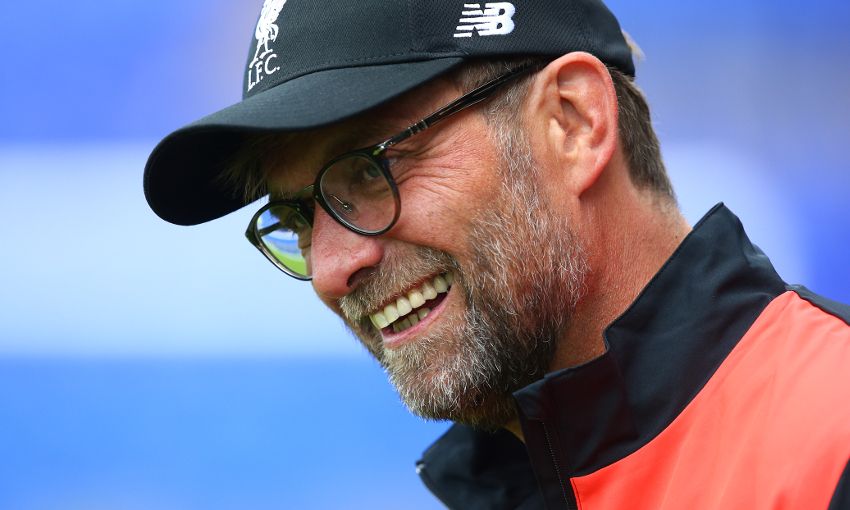 Jürgen Klopp is relishing the opportunity to experience the vast support for Liverpool in America at first hand – and expects the backing from local fans to provide his players with an extra boost.

The Reds touched down in California in the early hours of Thursday morning, having departed from John Lennon Airport shortly after beating Huddersfield Town 2-0 to secure a fourth successive pre-season win.

The serious business of building up fitness remains the constant priority for Klopp, but the manager is also looking forward to seeing the passion for the club in the USA.

In an exclusive chat with Liverpoolfc.com about the pre-season tour, he also explained how the players joining up will be integrated into the training programme and more…

Is this the moment you have been waiting for, almost since you took charge here? A pre-season with your squad, to work with your players rather than have to worry about a game every four days…

It’s a big difference and I’m really looking forward to it. If we can, we will be complete hopefully. That’s really good and the biggest difference. You have seen we have a very young group at this moment but it works. You can see the games [so far], we haven’t played too often together but we have had a few good situations, some good passing and some good movement. You can see we work together and I like this, but now we start nearly a new pre-season with all of the other players, because they start at nil if you want. They have only had three weeks off, that’s not too much, and actually they should have trained the last eight or nine days already on their own and hopefully they did! That will help a lot and we can start a little bit early with the tactical side of things, which will be very important. But it will be intense for all of the players, for sure. We have some interesting games and it will be intense but it is very important and hopefully we can use the time really well.

Watch every kick of every game on LFCTV and LFCTV GO>>

Will it be nice to be able to connect with Liverpool fans across the pond in the USA?

It’s my first experience [of playing a match over there]. I was in America for a holiday. It was a bit different with me being the Borussia Dortmund manager then to being the Liverpool manager now, because there are a few more Liverpool fans over there than Dortmund! Everybody has told me how big the club is and you get a feel of how big it is when you are in places like Asia and America, so I’m excited by this. We will get a first impression of how it is in other countries, so that’s good and really exciting. It will give us a push too, especially the new players, because it will tell them a lot about the club – the size and importance of this club. Sometimes you have to leave the country to see it and that’s what we will do now and we will see how it feels.

In terms of the significance of this trip, do you want to be at a moment with your squad when you come back from America that you will feel like you are ready to play Arsenal the next day?

No, that’s not possible because we have another 10 days or more [before then] and two games against Barcelona and Mainz, so that’s quite intense. Then we have another full week before we play Arsenal. So we have to use this time and sometimes it’s very special for the players who come later and we will have to see. Maybe we will have to extend the pre-season for them for another week or two, that depends on what shape they will join us to be honest. In the last two years with my former teams it was always like this. We had the highest physical level when they came to training because they fulfilled the plan we gave them. Now we have to see what these boys did and we have to take them from the position where they are and bring them to the best shape, but maybe that will be in a week or two. But we will have a team for the Arsenal game and the Burnley game and the game after that etc. We will always have a team that is ready for this game but at this moment I’ve no idea what it will be.