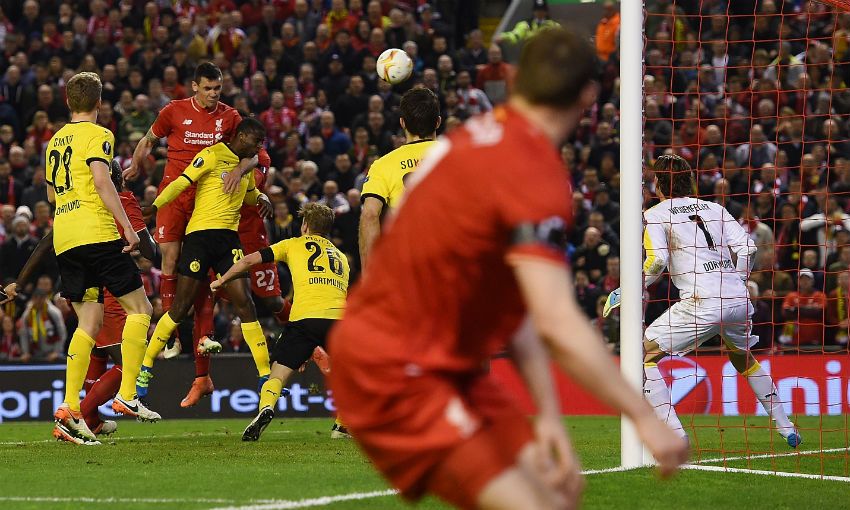 The penultimate photograph in the series depicts the conclusion of a European night that merits its place alongside the likes of Saint-Etienne ’77 and Chelsea ’05 in Anfield’s rich history.

“I told the lads, I was not there but a few Liverpool players who are a little bit older and work now as experts for television, they were 3-0 down at half-time but won a Champions League final.

“So even when it’s not really likely, it is for sure possible and we should try it.”

Liverpool, after all, needed to score three times without reply. An electrifying opening 10 minutes from Borussia Dortmund had involved the visitors netting twice to put them 3-1 up on aggregate.

After overcoming Manchester United in the previous round, the Reds were to be eliminated in the 2015-16 Europa League quarter-finals by Klopp’s former club.

Or so it seemed, anyway.

Divock Origi pulled one back early in the second half, but the burgeoning flame of faint hope among the home fans was soon doused by Marco Reus.

Or so it seemed, anyway.

In stoppage-time, at the Kop end, Dejan Lovren scored.

This iconic image was taken a split-second after a drifting cross from James Milner, shown looking on in the foreground, had been met with a thump by Lovren’s forehead.

It was taken a split-second before the ball hit the net and Anfield exploded in a state of disbelieving delirium.

“I know this is a place for big football moments,” said the manager afterwards.