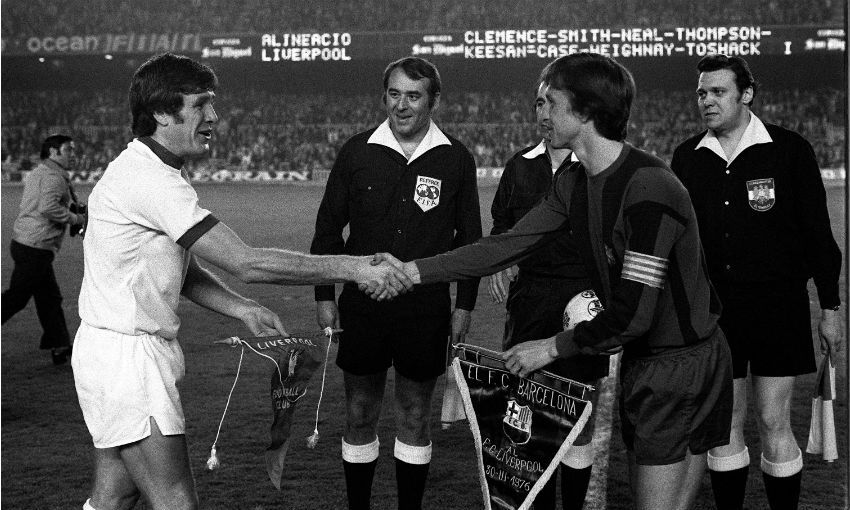 Throughout LFC's 125th anniversary year, Liverpoolfc.com will retrace the club's history through the striking images that plot a fascinating journey.

Seventh in the series is a photograph taken immediately before the Reds secured one of their finest European away victories.

Three days before Liverpool travelled to Barcelona for the first leg of their UEFA Cup semi-final in March 1976, Bob Paisley labelled the game 'one of the great occasions in our club’s history'.

“We’ll be going there to get a result. By that I mean a result which gives us the chance of winning the tie at Anfield in the second leg,” the manager wrote in a column for the Liverpool Echo.

“Naturally, to win would be magnificent. To draw would suit us very well, particularly if it is a score draw. To lose by just one goal could be absorbed and overtaken in the home leg, but to lose by anything more than that would not be good.”

Paisley needn’t have worried about the prospect of having to mastermind an Anfield comeback.

His team, captained by Emlyn Hughes, achieved the considerable feat of beating a Barcelona side containing the likes of Johan Cruyff and Johan Neeskens on their own turf.

John Toshack scored the only goal of the game to ensure the Reds not only marked their maiden visit to the Nou Camp with a victory, but also became the first English club to win at one of world football’s most iconic stadia.

Above, Hughes and Barca skipper Cruyff are photographed shaking hands and swapping pennants before the match. In the background, Paisley’s starting line-up is named on the Nou Camp’s electronic scoreboard.

This iconic image depicts a Liverpool legend exchanging pleasantries with an all-time great of the game.