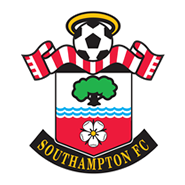 Liverpool were forced to settle for a point as they were frustrated by Southampton at Anfield as the Saints clinched a goalless draw. James Milner had a penalty saved by Fraser Forster as the Reds were unable to break down a stubborn visiting rearguard.

Jürgen Klopp addressed the media in his post-match press conference at Anfield in which he acknowledged his frustration at the goalless draw with Southampton. Click here to read a transcript of what he had to say. 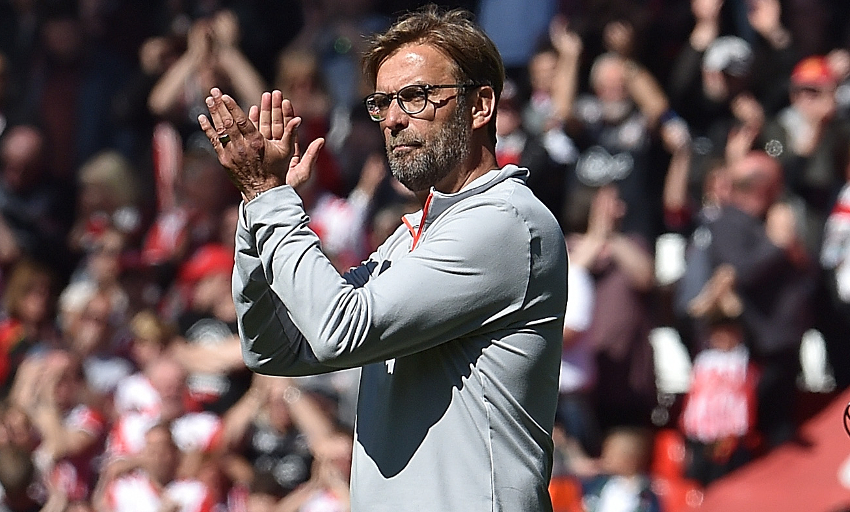 Klopp: "Now it makes sense for us to concentrate on West Ham. We're still fighting - what I can say is that we have one more point than before."

"It was one of those days, but it's not the end of the world. We'll keep going," says the boss.

The story of the game in stats...

It's all over at Anfield and Liverpool are left frustrated as they're held to a goalless draw by Southampton. James Milner was denied the chance to clinch the three points for the Reds when his second-half penalty was saved by Fraser Forster. A disappointing day in the race for a top-four finish. 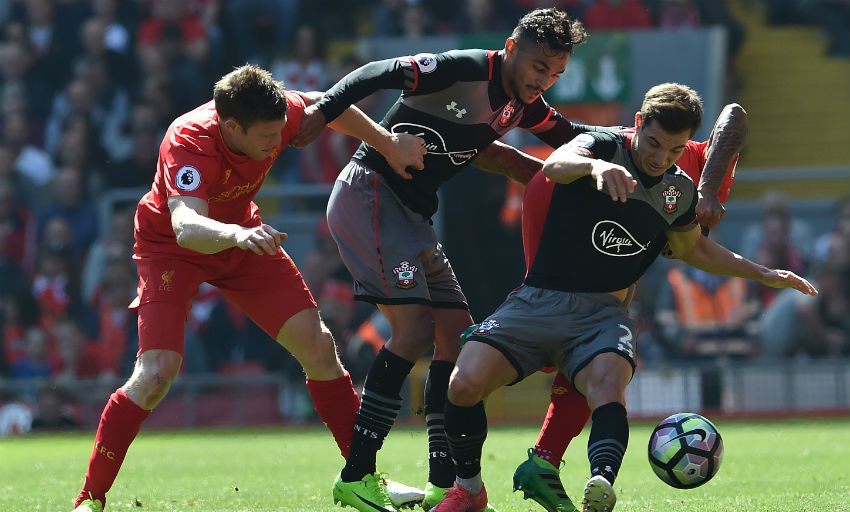 Grujic's header from Milner's cross is palmed over the bar by Forster.

Can's blast takes a deflection and goes wide...and no corner is given.

Marko Grujic comes on for the Reds to replace Wijnaldum.

Lallana drives one in from distance...saved by Forster.

Sturridge arrows a low effort towards the near post after a neat turn...again, it's just off target. He's been bright since coming on.

Lovely footwork from Sturridge to work space inside the area, but his prod is straight at Forster.

Coutinho takes aim with his left foot from the edge of the area, but it's too close to Forster.

Yoshida's glancing header at a corner is flicked away by Lovren.

Double change for Liverpool - Origi and Lucas off, Sturridge and Lallana on.

Forster keeps out Milner's penalty with a low save to his right.

Stephens handles inside the box and the Reds have a spot-kick.

The ball drops invitingly for Can 20 yards out but he doesn't make a clean connection and the effort is off target.

Early scare for the Reds as Boufal wriggles free inside the box, but Matip sweeps up the danger.

Early scare for the Reds as Boufal wriggles free inside the box, but Matip sweeps up the danger.

We're back under way

Liverpool restart the game at Anfield and will attack the Kop in the second half.

An early goal for the Reds would be nice.

Here's how our official betting partner, BETVICTOR, see the odds at the half-way stage...

Fancy a flutter? Click here to bet with BETVICTOR.

Here's how the first-half numbers stack up...

All square at the break here at Anfield in a game of few chances so far.

Can gets half a yard for a shot on the edge of the area, but it strikes a defender which takes the sting out of it and it's a routine take for Forster.

Firmino bounces off a couple of challenges and motors forward before striking low at goal; however, his effort lacks the pace and accuracy to beat Forster and the goalkeeper claims.

The game has lost its initial zip, with Southampton sitting deep and frustrating the Reds. 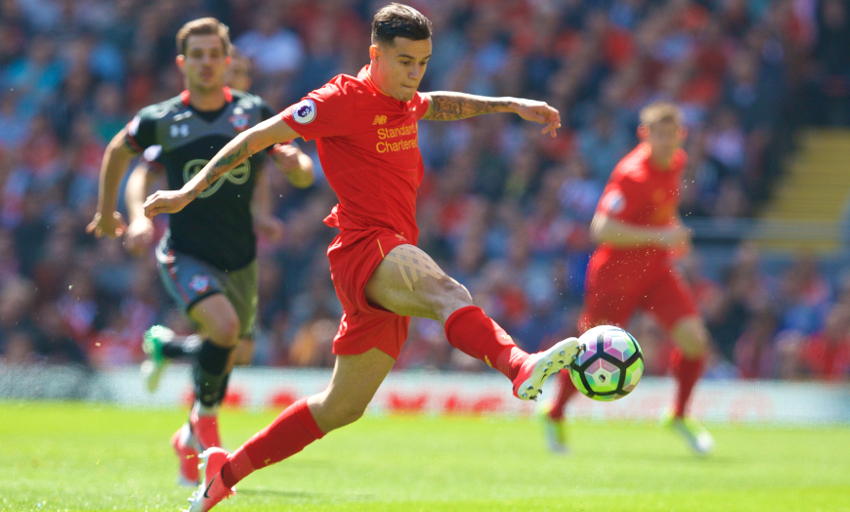 Coutinho shifts the ball onto his right and curls at goal from 25 yards, but it's an easy take for Forster.

Liverpool doing all the probing here.

The first opportunity of the game falls Liverpool's way as Firmino wins the ball off Romeu on the edge of the area and strikes goalwards, but Yoshida makes a crucial block.

Still awaiting the first chance of the game, but there's a lively feel to this one at Anfield.

There's a great atmosphere inside Anfield in these early exchanges - and the Reds have started promisingly.

Southampton kick the game off and we're under way at Anfield.

The teams are ready in the tunnel, the sun is shining and Anfield is looking glorious.

A reminder of today's line-ups...

Inside the home dressing room... 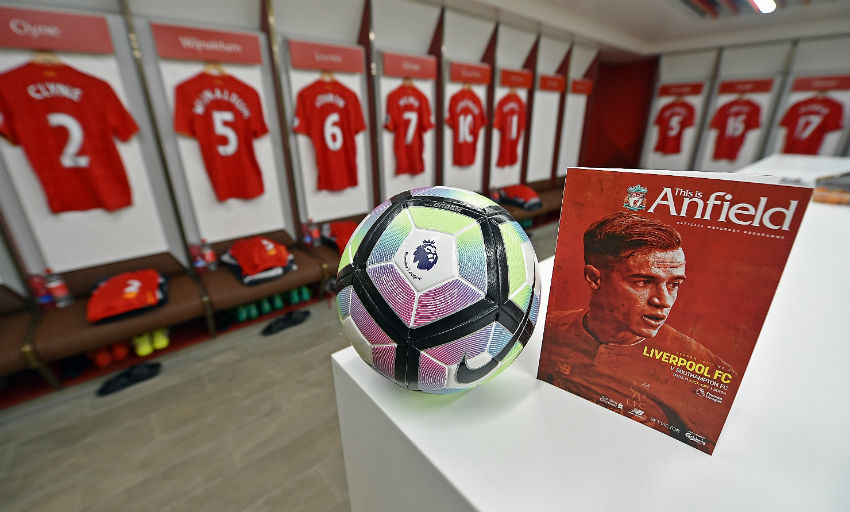 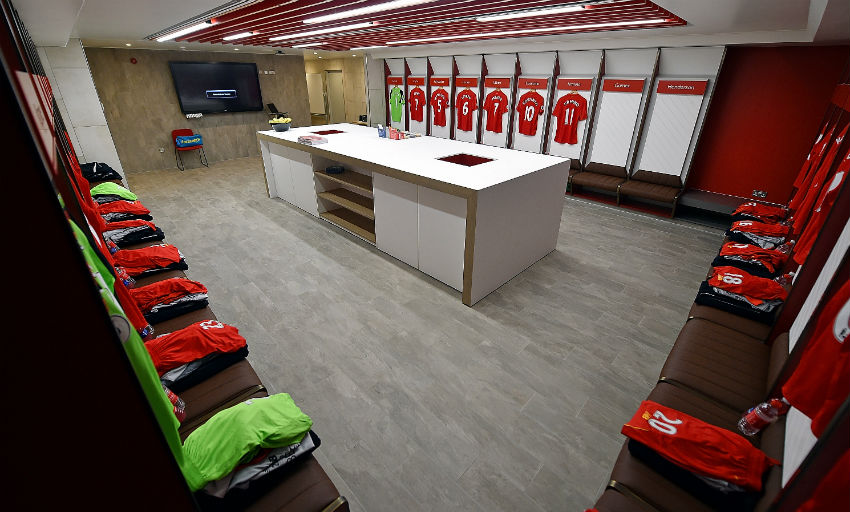 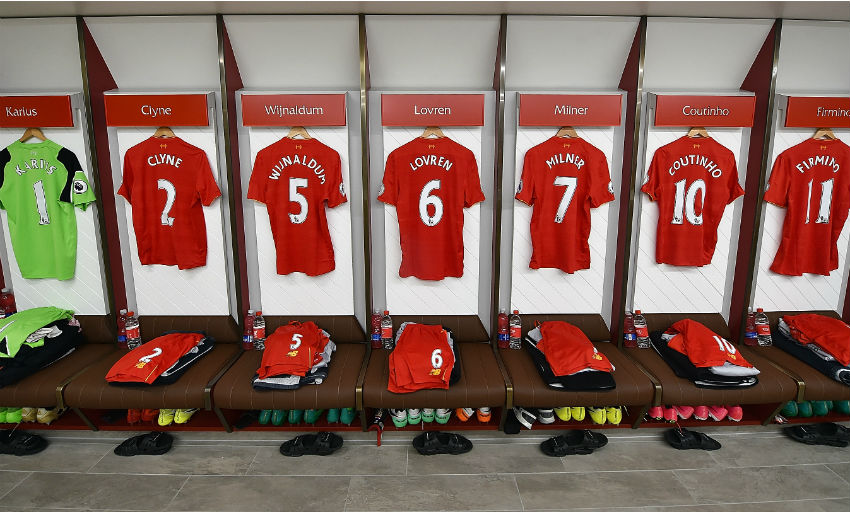 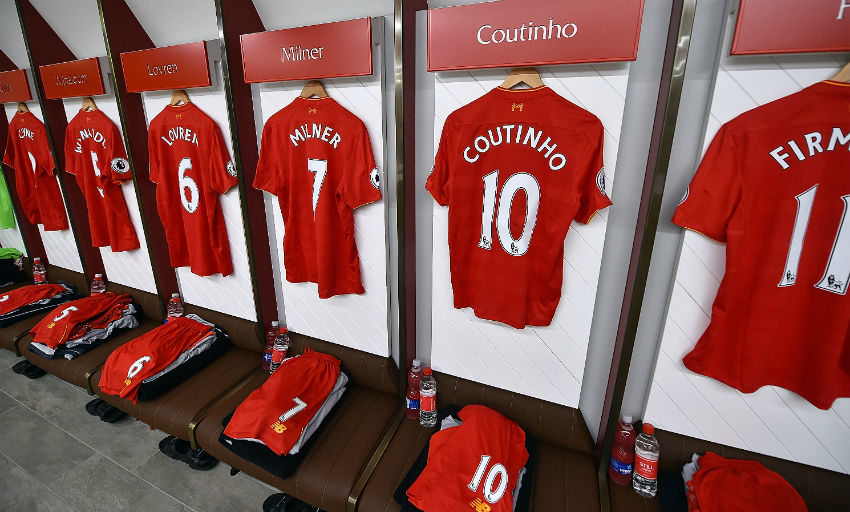 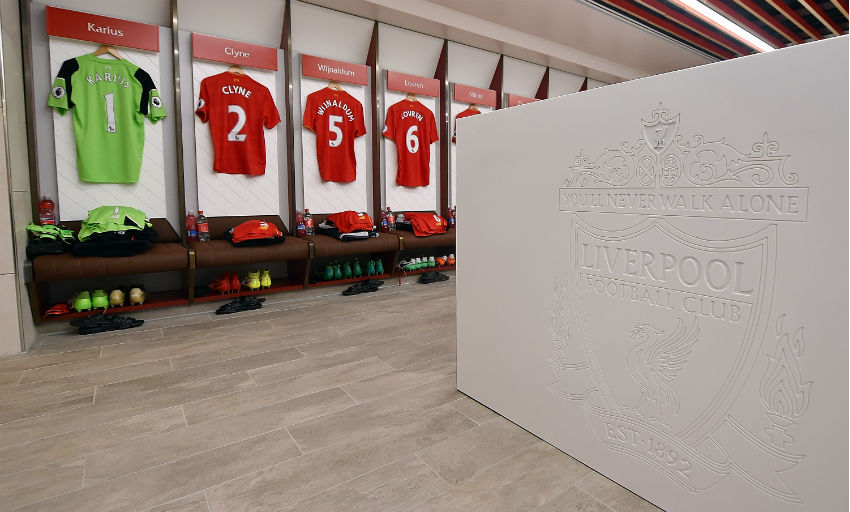 The players are here 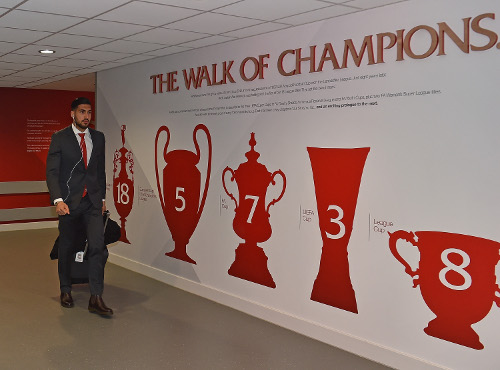 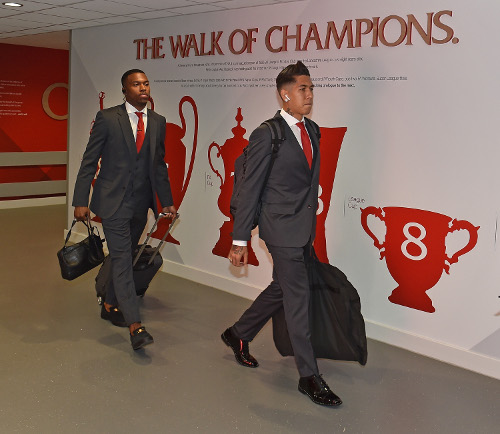 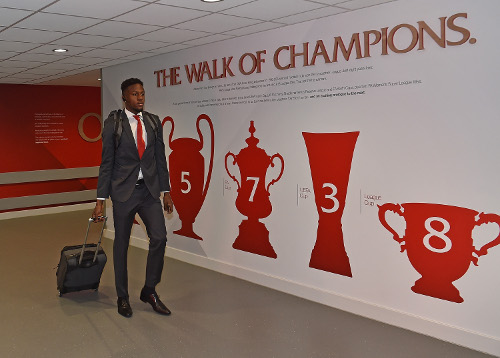 The teams are in! Here's how #SaintsFC line-up to face #LFC this afternoon: https://t.co/XPprtGURDz

The teamsheets are in at Anfield, and Jürgen Klopp has named an unchanged starting line-up for the fourth game in a row.

Philippe Coutinho has recovered from the dead leg that forced him off in the early stages of last Monday’s victory at Watford, with Adam Lallana - who replaced the Brazilian at Vicarage Road - again included among Liverpool’s substitutes.

Co com at Anfield for @LFC @SouthamptonFC which tells me @SkyFootball want Man Utd/Arsenal to get 4th as they know… https://t.co/tgiFsoaJ0a

Congratulations, @SydneyFC! 👏 We can't wait to face you on May 24! ⚽ https://t.co/zctwRsBOPc

Anfield in the sunshine #LFC https://t.co/Obuu19kgsU 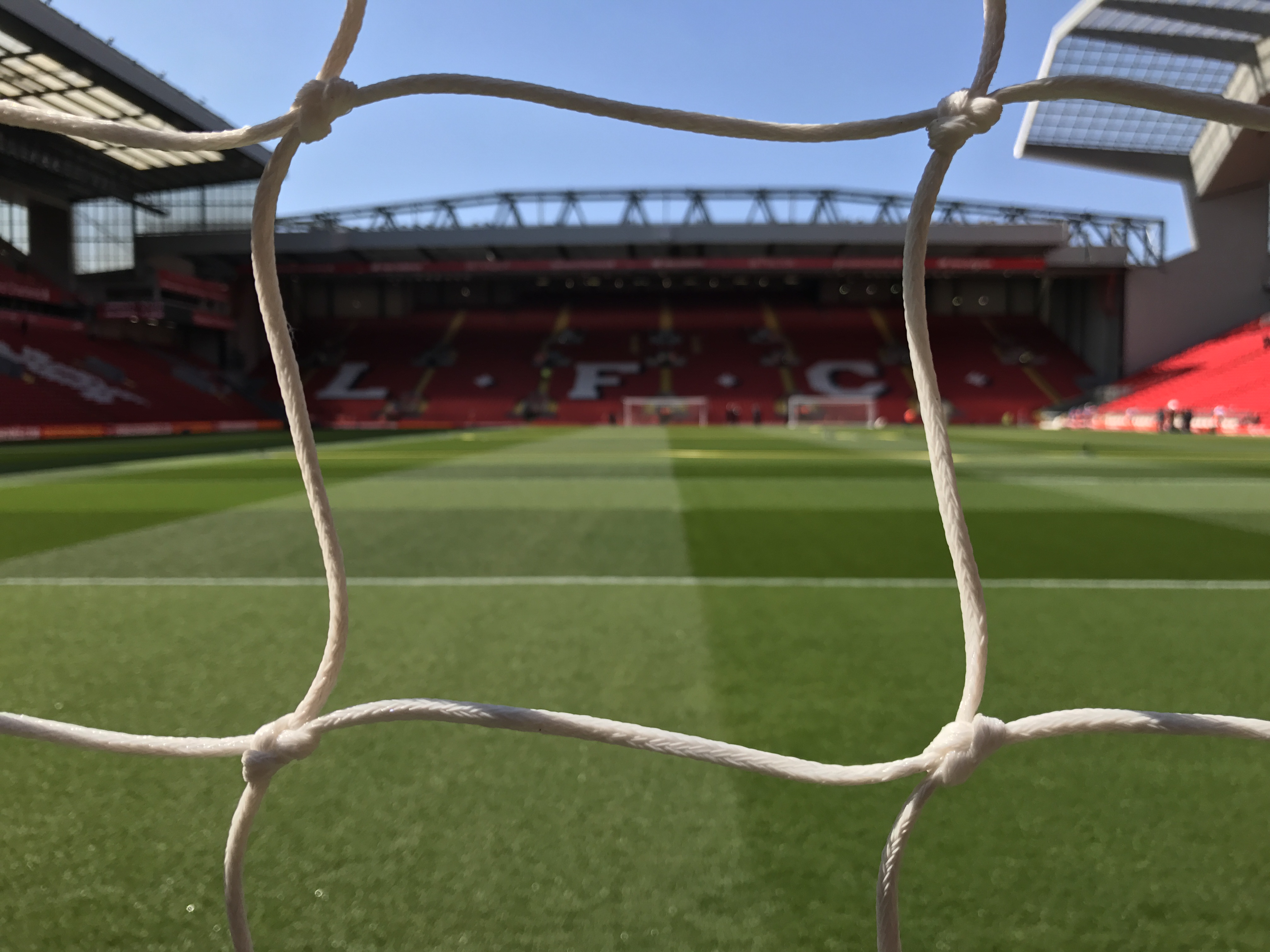 See how the Reds prepared for today's match with our latest gallery of training shots from Melwood. 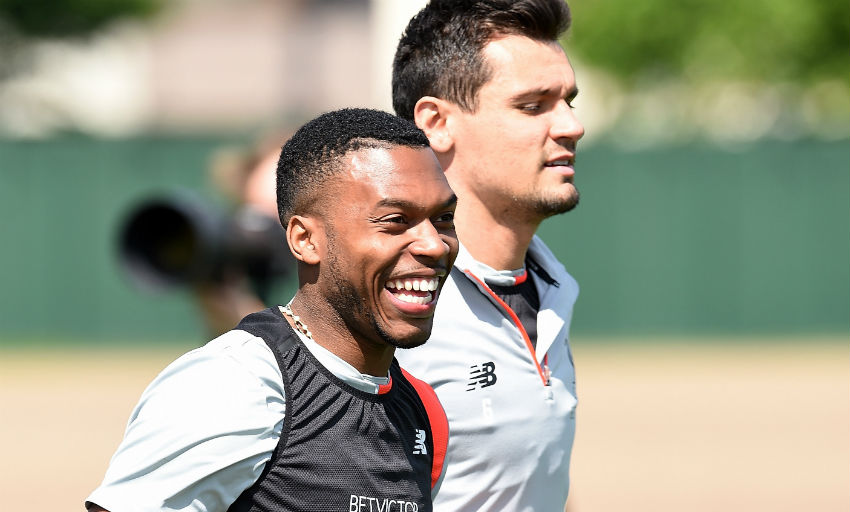 Philippe Coutinho has scored in each of Liverpool's last three home matches. The last player to find the net in four successive Anfield league games is Daniel Sturridge, who did so in March 2014.

It's that time again

If you're heading to Anfield later, leave those umbrellas at home.

We're looking at temperatures of 13 degrees celsius come kick-off, with just a one per cent chance of rain - not bad

Jürgen Klopp has used his programme notes today to hail the news that the Centenary Stand at Anfield is set to be renamed in honour of Kenny Dalglish.

Take a peek at his contribution to the latest edition of This is Anfield here.

And if you want to buy the programme later, this is what you're looking out for. 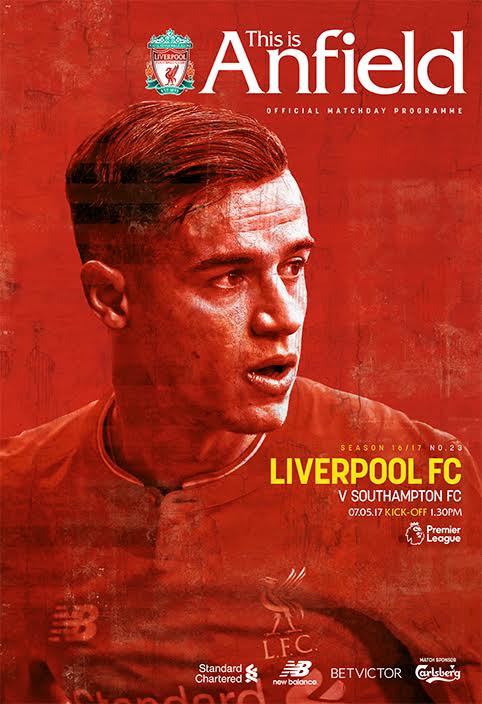 Take advantage of those odds here.

The Reds are aiming to keep their top-four hopes on track with another three points today, but it won't be easy against a side they have faced three times already this season without recording a win.