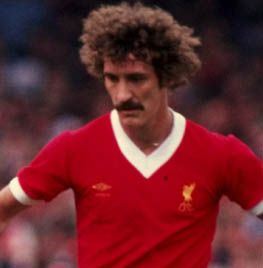 Terry McDermott was a spectacular midfield player who graced the Kop and scored arguably the best goal ever seen at Anfield during the 7-0 win over Tottenham at Anfield in 1978.

He needed two years to settle into the side, but he blossomed when he did. He scored some truly memorable goals and his wizadry in midfield with tough tackling Souness by his side was justly rewarded in 1980 when he became the first player to win the Football Writers' and PFA's Player of the year awards in the same season.

Kirkby-born Terry McDermott supported Liverpool as a boy but his first professional club was Bury, from where he moved to Newcastle United in February 1973. He played in 56 league matches for the Magpies and was one of two of their players, along with Alan Kennedy, who played against Liverpool in the 1974 FA Cup final and later moved to Anfield.

Terry returned to his native Merseyside in November 1974 when he was a few weeks short of his 23rd birthday as one of new manager Bob Paisley's earliest signings. Although Terry played in six successive First Division games soon after his arrival, it was a frustrating time for him to be in and out of the team as he settled in at his new club.

In 1975-76 he was selected in the starting 11 for the opening seven league games but after that was only called on twice more that year, both times as a substitute. It began to look as if a change of club would be the only way to resurrect his career but thankfully he stayed patient and his reward finally came in the memorable 1976-77 season when he was finally accepted not just as a good squad-player but an important member of the side itself.

He made 26 First Division appearances that year and picked up the first of 4 championship medals. He only scored once in the league but the goals would come as he became known not just as a creative midfield player whose passing was so accurate but also as a 'runner' from deep who would often end up in or around the opposition penalty box to finish what he or someone else had started.

The disappointment of again finishing on the losing side in an FA Cup final was soon forgotten as a typical run into space to collect Steve Heighway's pass saw him fire the Reds ahead in the 1977 European Cup final. Terry would add two more winners' medals to his collection in the world's most prestigious knock-out competition and many other team and individual honours would follow, including being named "Footballer of the Year" by the Sportswriters and his fellow footballers in 1980.

In four seasons when he was at his peak, he contributed nearly 50 league goals as well as many more vital strikes in cup competitions. He became a regular member of the England squad and was capped 25 times. Even in 1981-82 as he passed his 30th birthday and when his position in the side was being seriously challenged by younger men, he recorded his highest total of league goals in a single season for Liverpool, 14 from only 29 appearances.

His long-range shooting became a feature of his game to add to his vision and tactical awareness and his chip in the replayed FA Cup semi-final with Everton in 1977 was voted 'Goal of the Season' by the BBC. Another awesome strike dumped Spurs out of the FA Cup in 1980 but perhaps his most memorable goal had came against the same opposition at Anfield two years earlier when a sweeping move from one end of the pitch to the other saw him race 70 yards to powerfully head Steve Heighway's cross past Barry Daines, the final blow of Tottenham's 7-0 humiliation on that late-Summer's day. He also scored a stunning hat-trick in only 16 minutes when Kevin Keegan returned with Hamburg for the second leg of the Super Cup in 1977 and another European hat-trick when the Finns from Oulu were trounced 10-1 in the Champions' cup of 1980-81.

By the start of the 1982-83 season, it was clear that Terry would finally have to look elsewhere for first-team football and he returned to St. James' Park in September 1982. After two short spells in Ireland and Cyprus, he signed for Newcastle for a third time and linked up again with Kevin Keegan as his assistant. Keegan had returned to England after an eight-year exile in Spain to take up the demanding role of manager with the North-East club. Patience was the key to Terry's eventual success as a player. He wanted to play so badly for the club he had grown up supporting and when he finally left Liverpool after 329 games and 81 goals, he had probably surpassed his wildest dreams by achieving as much as he did during the eight years he was at Anfield.