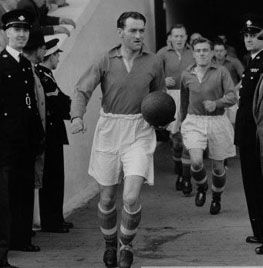 Liverpool legend Phil Taylor changed from a promising centre forward into a classy centre-half who took over the captaincy from Jack Balmer in the 1949-50 season.

Taylor was born in Bristol in September 1917 and played briefly for his home-town club Rovers before joining Liverpool in March 1936 for a fee of five thousand pounds. He scored a last-minute goal at Derby on his debut on March 28, 1936, to save a point in a 2-2 draw and made a further 6 First Division appearances before the season closed, also netting against Blackburn Rovers. Liverpool finished in 19th place that year and only one place higher the following year before climbing to mid-table respectability by the end of the decade as the Second World War drew ever closer.

Liverpool won the first post-war League championship and Phil, by now approaching his peak at 29-years-old, played in 35 of the 42 League matches and would continue to a regular and reliable member of the team's defence for the next four years. He captained Liverpool through their run to the club's first-ever Wembley cup final in 1950 but there was only disappointment after a 2-0 defeat by Arsenal. Once he had passed his 30th birthday, Taylor was selected less frequently and he made the last of his 314 Football League appearances for Liverpool at West Bromwich Albion on Christmas Day, 1953. Phil remained at Anfield when he retired as a player in 1954, serving as chief coach before replacing Don Welsh as manager in May 1956. But failing health and the stress of just missing out on promotion in three successive seasons eventually led to his resignation in November 1959. A terrible FA cup defeat at non-League Worcester City earlier in the year must have put extra pressure on him but when none of the five League fixtures Liverpool played in October 1959 were won, he felt that his position at the club was no longer tenable. It was over 23 years since he had first arrived at Anfield as an 18-year-old player.