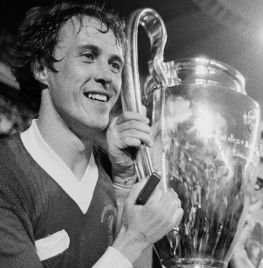 Phil Neal is the most decorated player in Liverpool history.

The full-back helped bring 22 pieces of silverware to the Anfield trophy room and was the only player to feature in each of the Reds’ first four European Cup triumphs.

Never has the term ‘Mr Consistency’ been more apt than when discussing the merits of Neal in a Liverpool shirt.

Plucked from Fourth Division obscurity for £66,000 in October 1974, the former Northampton Town man was one of Bob Paisley’s first managerial acquisitions and undoubtedly one of his most inspired.

A month after his low-key arrival, Neal was pitched into his senior debut at just a few hours’ notice, but made a good early impression by coping admirably with the intense pressure of a high-octane goalless Merseyside derby at Goodison Park.

From there he became an almost permanent fixture in the legendary back four of the late 1970s, making a record 365 consecutive league appearances between December 1974 and September 1983.

Adept in both full-back berths, it was on the right side that he eventually settled. Dependable rather than spectacular, he set about his tasks with the minimum of fuss and was never one to seek the limelight.

Calm under pressure and a real team player, it was no surprise when an England call came his way. Neal went on to represent his country 50 times and later became assistant manager under Graham Taylor.

Not many opposition wingers got the better of Liverpool’s No.2, while at the opposite end of the pitch he made an equally vital contribution to the club’s ongoing success.

He was a prolific marksman by full-back standards, with a tally of 59 goals; most of these came from 12 yards, including a spot-kick to seal the Reds’ first European Cup against Borussia Monchengladbach.

Seven years later, also at Rome’s Olympic Stadium, he again found himself on the scoresheet in a European Cup final, prodding the ball home from close range to open the scoring against hosts AS Roma. Later in the evening, he held his nerve from the spot once more as Liverpool upset the odds to clinch a fourth European crown.

Neal’s loyalty and commitment was deservedly recognised in the summer of 1984 when he was selected to succeed Graeme Souness as captain.

Unfortunately, his one and only season in the role was to end in tragedy with the events of Heysel. A change in management during the close season that followed brought an end to his short-lived tenure as skipper.

With the emergence of Steve Nicol, Neal finally severed his Kop ties in December 1985 to take up a player-manager role at Bolton Wanderers.

He left Anfield with a haul of medals which included four European Cups, eight league titles, four League Cups and a UEFA Cup.

This, as well as his sheer consistency, means Neal holds legendary status at Anfield.