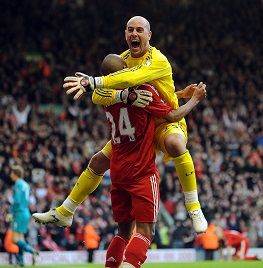 Jose Manuel Reina developed into one of the world's most assured goalkeepers and helped turn Liverpool into a force to be reckoned with domestically and in Europe during a stellar stay on Merseyside.

The bald-headed stopper, who goes by the nickname Pepe, certainly had the pedigree after coming through the ranks at Barcelona, and he soon set about smashing a collection of Anfield records after being signed by Rafael Benitez in July 2005.

Immediately installed as first choice in goal despite Jerzy Dudek's Istanbul heroics two months previously, Reina's debut was a Champions League qualifier against TNS on July 13; a month later he won his first Spain cap in a 2-0 victory over Uruguay.

A year to remember for the 'keeper got even better in December when he and his teammates kept a club record 11th successive clean sheet against Deportivo Saprissa in the World Club Championship.

Reina's first Liverpool campaign ended with an FA Cup final against West Ham United, and though he made a number of errors in normal time, his habit of saving spot-kicks once again made him a hero. Three out of four of the Hammers' penalties were blocked and the trophy was heading to Anfield for the seventh time.

He travelled to the 2006 World Cup in Germany with Spain but did not feature on the pitch, so set about racking up another Reds record upon his return. A shut-out against Blackburn Rovers in April 2007 was his 28th in his first 50 league games - three more than Kop legend Ray Clemence.

A Champions League semi-final shootout against Chelsea brought the best out of the Spaniard once more, crucially saving two, and three weeks later he became only the third player to follow in his father's footsteps by appearing in a European Cup final. Unfortunately, like former Atletico Madrid stopper Miguel Reina Santos, he was on the losing side.

Reina was rewarded with a new contract at Anfield in the summer of 2007 and although the season that followed would end without success, he had the personal honour of winning the Golden Gloves award for most clean sheets in the Premier League for the third successive year.

His displays were not quite enough to grab the No.1 jersey for Spain, but the 'keeper did feature once at Euro 2008 as his country scooped their first major honour since 1964 - and the sight of him celebrating each and every goal illustrated his importance to the squad.

Liverpool supporters voted Pepe as their Player of the Season for 2009-10, sending him off to the World Cup and what would prove a triumphant summer. Again he did not play, but once more his character in the dressing room contributed to the Spanish taking glory.

A frustrating time followed with his club, as Champions League football disappeared; however, the stopper stayed loyal and deservedly took home a medal when Kenny Dalglish's charges lifted the Carling Cup by beating Cardiff City at Wembley in February 2012.

By 2013 and with Reina nearing a decade at Anfield, serious competition arrived in the form of Simon Mignolet. The Belgian took the gloves under Brendan Rodgers and Pepe sealed a reunion with Benitez at Italian challengers Napoli on loan.

During his season away, the Madrid native clocked up 43 games and lifted the Coppa Italia. He subsequently travelled to the World Cup with Spain and finally made a debut appearance at that stage amid a disastrous campaign for the holders.

Back at Liverpool, Reina joined the club for a summer tour of the United States but shortly after returning, it was announced that the stopper had completed a permanent transfer to German giants Bayern Munich.