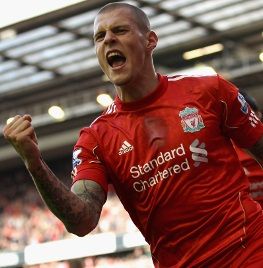 The Slovakia international was signed from Zenit St Petersburg by Rafael Benitez in January 2008 as the manager continued to assemble a squad capable of challenging for the Premier League title and competing in Europe.

Skrtel made his Reds debut 10 days after joining the club, appearing as a second-half substitute in a 2-2 draw with Aston Villa at Anfield, and featured 19 more times in the remainder of the season.

Having settled into life on Merseyside, the defender's name was soon on the teamsheet with greater regularity and he contributed to a memorable title challenge in 2008-09.

Benitez had pieced together perhaps the most balanced and talented side of his Liverpool reign that term, though they had to settle for second place behind Manchester United despite losing only twice in the league.

A tumultuous couple of years followed. The team's form dipped, Roy Hodgson was installed as manager and Kenny Dalglish later replaced him, while new owners arrived to set the club on a new course.

Skrtel found confidence and consistency amid it all, playing in every Premier League game during 2010-11 and beginning to chip in with goals, notching four the next season.

In February 2012, Martin tasted trophy success for the first - and ultimately only - time in his Reds career with the lifting of the League Cup at Wembley.

He was on the scoresheet in the final against Cardiff City too, hammering home an equaliser early in the second half of a tie that would eventually end in a 2-2 draw after extra time.

A penalty shootout decided it and Liverpool were the victors, ending the club's six-year wait to add to their honours list and handing Dalglish silverware in his second spell as boss.

Brendan Rodgers was appointed manager in the summer of 2012 and Skrtel's position came under threat in the Northern Irishman's opening 12 months - but the centre-back's response was excellent.

He missed only two Premier League fixtures in 2013-14 and weighed in with seven goals as the Reds were cruelly denied the championship by Manchester City on the final day of the season.

Tougher times followed, with Rodgers' charges unable to reproduce those exploits again, either domestically or in Europe. He gave way to Jürgen Klopp in October 2015 and Martin again found that his place in the team was not guaranteed.

There were still memorable moments on a personal level, including a thunderous volley to cap off a 4-1 rout of Manchester City in the German's initial weeks at the helm.

But at the end of the season, Skrtel's lengthy spell with the Reds came to an end as he agreed a permanent switch to Turkish side Fenerbache.