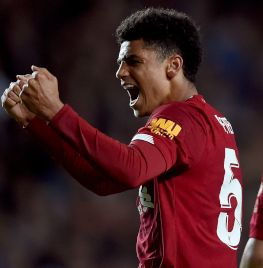 The Netherlands youth international joined the Reds from Ajax in September 2018 and quickly rose through the Academy ranks courtesy of his composed displays, predominantly at right-back.

Such was Hoever’s progress, he made his senior debut midway through his maiden season on Merseyside – the landmark appearance arriving 11 days before his 17th birthday.

Hoever was introduced as a sixth-minute substitute during the FA Cup third-round clash between Liverpool and Wolverhampton Wanderers at Molineux in January 2019.

He went on to appear four times in total for the Reds, scoring one goal – a header against Milton Keynes Dons in the Carabao Cup – and collecting medals in the UEFA Super Cup and FIFA Club World Cup the following season.

The defender departed Anfield in September 2020, agreeing a permanent move to Premier League side Wolves.