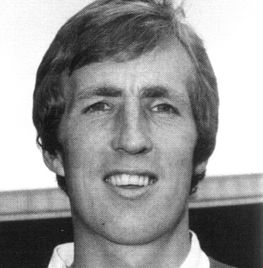 Joey Jones was a steely left back whose exploits on the road to victory in the European cup in 1977 were immortalised in a banner that read: "JOEY ATE THE FROGS LEGS, MADE THE SWISS ROLL, NOW HES MUNCHING GLADBACH".

However the European victory seemed to be the beginning of the end for Jones who lost his place in the team in January the following season.

The charismatic Welshman became a 'cult figure' on the Kop after his transfer from Wrexham, even though he only actually played for Liverpool during three different seasons. Joey was an enthusiastic and tough-tackling left-back whose uncompromising style quickly endeared him to the Liverpool crowd. He was 20 years old when Bob Paisley signed him in the summer of 1975 and still a bit 'raw', which perhaps explained why - even though he started the season in the first-team - he only appeared in 13 First Division matches, one short agonisingly of the number required to qualify for a championship medal.

The left-back role was also covered by Phil Neal and Alec Lindsay (briefly) in 1975-76 but a year later Joey had established himself in the first-team and only missed three of the 42 league fixtures.

1976-77 was his and Liverpool's greatest year of the decade; only Manchester United's victory in the FA cup final prevented it from being the greatest-EVER season in the club's history. But Joey was a member of the side that finally brought the European cup back to Anfield after their memorable triumph in Rome. Midway through the next season, Joey lost his place to the ageing but still dependable Tommy Smith and then subsequently to a young Alan Hansen. It was clear that his time at Anfield was drawing to a close.

Joey eventually rejoined Wrexham and later had spells at Chelsea and Huddersfield. Joey finally returned to his first club for a second time before the 1987-88 season and when his playing career finally ended, he continued to work at The Racecourse Ground as a coach with the same enthusiasm that he had always displayed as a player - a role he still fulfills to this day.

Joey was 'capped' over 70 times by his country and even though he stayed only three years at Liverpool, he is still fondly remembered by the fans as one of the most colourful characters ever to pull on the famous red shirt.