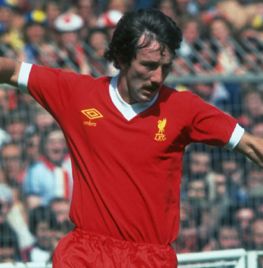 A tough tackling midfielder who took no prisoners Kop idol Jimmy Case was also renowned for his ferocious shooting ability, scoring more than a fair amount of goals in his career.

He arrived at Anfield after playing for the Merseyside club South Liverpool and was an instant success when he made his league debut at Anfield as a 20 year old on the final day of the 1974-75 season against Queen's Park Rangers, a fixture the Reds won 3-1.

He established himself the following season, making 39 appearances for the first-team in all competitions and scoring 12 times - three of which came on a foggy December night on Merseyside as the Poles from Wroclaw were defeated in the UEFA cup. Case also scored important goals in the quarter-final and the final of that competition and added a European winners' medal to the championship medal already secured at the end of his first full season as a first-teamer.

Although still only 22 when the 1976-77 season began, Jimmy had already built a reputation for himself as a tough-tackling, hard-working midfielder who packed a venomous shot. His long-range shooting became a feature of his game and many of the 45 goals he scored for the club came from distance, like the majestic turn and volley with which he scored in the 1977 FA cup final against Manchester United.

He added another championship medal in his second full season and was also a member of the team which finally won the greatest prize of all on that famous night in Rome when the European cup secured won for the first time. He would go on to win two more winners' medals in that tournament plus another two in the domestic championship.

Although an integral part of the team by now missing only the last five games of the 1979-80 league campaign, many of Case's appearances the following season were as substitute. Case lost his place to Sammy Lee in the 1980/81 season, but went on to play for a number of years after leaving Liverpool in a highly successful career.

In the summer of 1981 he was transferred to Brighton & Hove Albion, with whom he returned to Anfield two years later and scored the goal which knocked his former club out of the FA cup. He later joined Southampton in his early 30's and was to continue playing league football to a high standard for several more seasons and retired when he was 41 years old.