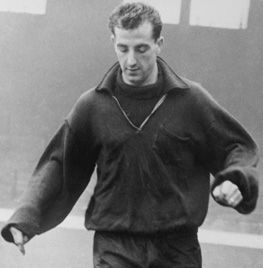 He made his League debut at Charlton Athletic on 28th September 1957,  but that was to be his only outing that season and the experienced full-back pairing of John Molyneux and Ronnie Moran prevented him from making more than a handful of appearances during the following two years.

However, Bill Shankly's arrival in late-1959 changed Gerry's prospects completely as the new manager seemed to take a liking to the tough-tackling defender.

Gerry he took over from Moran in the autumn of 1960 and played in the remaining 33 League games of that season.

Byrne was to become a regular for the majority of the rest of the decade and was an important part of the settled team that brought so much success to the club in the middle of the 1960s.

He might not have been as well-known as some of his colleagues, but his uncompromising style and courage were never in question; and that was never shown more clearly than on the day Liverpool finally won the FA Cup for the first time after 72 years of trying.

Byrne was injured very early on in the 1965 final against Leeds United and although trainer Bob Paisley knew that Gerry had broken his collar-bone after a tough tackle, and was in danger of puncturing his lung if involved in a similar challenge, the player concealed his injury - at a time before substitutes were allowed - and bravely carried on although in extreme pain.

The extent of his injury was not revealed until the final was over, by which time Gerry had a winners' medal in his pocket and an important involvement in the first, vital breakthrough goal scored by Roger Hunt early in extra-time.

Gerry was in England's World Cup winning side in 1966 alongside team mates Roger Hunt and Ian Callaghan, although he failed to make an appearance in the finals.

1968-69 was Gerry's last season as a Liverpool player. Although he had celebrated his 30th birthday a few days into the season and was by no means over the hill as a player, the injury problems which had wrecked most of the 1966-67 season for him were to recur and he made his final appearance for the club against Wolves at Anfield early April 1969.

Gerry's reward for a career, which had seen him play 333 times for the first-team in all competitions, was a testimonial match attended by nearly 40,000 people, who braved appalling conditions to pay tribute to a man that had been an integral part of the success story of the previous few years.

Though his career had been cut short by injury, Byrne had the satisfaction of being part of the best Liverpool team for many, many years and the medals he took home with him in League and Cup confirm that fact.

On the 10th of June 2009, Gerry was presented with a World Cup winners' medal at a special ceremony in London to mark the fact he had been a member of England's 22-man squad in 1966 even though he did not play in any of the six matches which took the Three Lions to the pinnacle of world football.