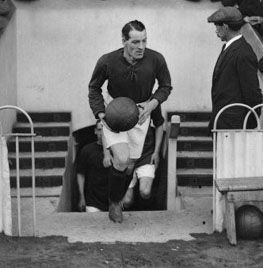 Scottish full-back Donald MacKinlay had one of the longest careers of any Liverpool player, although four years of his professional life were lost to the First World War.

Although he only made 10 first-team appearances in his first three seasons on Merseyside and less than 60 in league and cup before war broke out, it was in the decade after the war that he really came to prominence. Having experienced the pain of losing a cup final as a relatively young man in 1914, he made up for that disappointment in style by captaining Liverpool to successive League championship titles in 1922 & 1923, playing in all 42 league matches on the second of those occasions.

Donald's versatility in being able to play in a number of different positions brought him over 30 league goals, with his best total for a season being the 6 he got in 1912-13, 1922-23 and 1923-24. He continued to play regularly throughout most of the 1920's without his position in the side ever being seriously threatened until he made what would be his final appearances for the club in the opening two games of the 1928-29 season. Donald stayed in the Merseyside area to play non-league football for a while and later became a publican in the city of Liverpool.
Other Clubs:
Newton Swifts, Newton Villa, Prescot Cables (amateur)