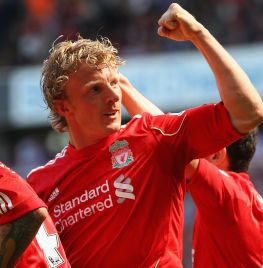 Dirk Kuyt is one of the hardest workers Anfield has ever seen - and his time at the club was punctuated by never-to-be-forgotten goals.

In six years at Liverpool the Dutchman scored in Champions League and League Cup finals, hit hat-tricks and braces against our biggest rivals, and smashed home numerous crucial penalties.

Originally signed by Rafael Benitez in 2006 as a striker, he proved himself to be selfless and versatile by operating just as often on the right wing.

Kuyt arrived in England boasting a prolific goalscoring record in Dutch football, latterly with Feyenoord, and he instantly found favour on the Kop with an all-action debut as a substitute at home to West Ham United.

The Netherlands international notched his first Liverpool goal against Newcastle United in September 2006, and he'd net a further 13 in his debut season.

At the end of that campaign, Liverpool reached a second Champions League final in three years, with Kuyt netting the winning penalty in the semi-final shootout triumph over Chelsea.

He was rewarded with a starting place in the final against AC Milan and it was he who scored the Reds' late consolation in Athens on an otherwise disappointing night.

One of the No.18's finest moments for the Reds came in October 2007 with a penalty brace at Goodison Park as Liverpool clinched a dramatic last-minute win over their bitter rivals.

This came just months after the death of his father, a personal tragedy which, by his own admission, impacted upon his game.

However, at the end of 2007-08 Kuyt had returned to top form, with priceless goals against Marseille, Inter Milan and Arsenal helping the Reds reach another Champions League semi-final. Defeat by Chelsea followed, despite another goal in the Anfield leg to take his tally for the season to 11.

By the start of 2008-09, Benitez had moulded the six-footer into an indispensable right winger, from where he scored 15 times to help Liverpool take champions Manchester United right to the wire.

Kuyt continued his knack of breaking Everton hearts with goals in both 2009-10 derbies en route to a final haul of 11. Sadly, it proved to be a poor season for the club as a whole, with failure to qualify for the Champions League resulting in Benitez parting company with the Reds.

The weeks that followed would go some way to easing Kuyt's disappointment, however, as the Netherlands reached their first World Cup final in 32 years.

He started every game in the South Africa tournament, where his performances earned universal acclaim. Dutch icon Johan Cruyff was among those to laud the forward, claiming he was 'worth his weight in gold'.

Despite Kuyt's best efforts, though, it was clubmates Fernando Torres and Pepe Reina who returned to Melwood with World Cup medals following Spain's extra-time victory.

He found some consolation in top scoring for the Reds in 2010-11, with his tally of 15 including an unforgettable hat-trick against United at Anfield.

The following season saw Kuyt finally collect a first medal with Liverpool. He scored a goal in extra-time and then converted a spot-kick in the Carling Cup shootout win over Cardiff City.

It would prove to be one of his final acts in a Liverpool shirt. Kuyt left for a new challenge at Turkish side Fenerbahce in the summer of 2012 with his place as an Anfield great secure.