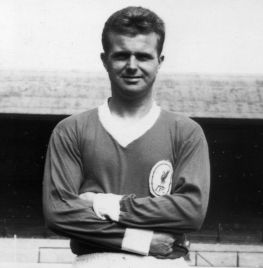 Alan A'Court was a strong and direct left winger with awesome power in his boots.

A regular on Liverpool's left flank for a decade, his talent was such that he represented England in the 1958 World Cup finals in Sweden while he was still a Second Division player.

Born in Rainhill, A'Court gave the club outstanding service from the day he made his debut against Middlesbrough as an 18-year-old in February 1953 until the last of his 381 appearances in September 1964.

When Peter Thompson was signed from Preston North End to fill the left-wing role that Alan had made his own for so long, he moved on to Tranmere Rovers in October 1964.

His farewell appearance for Liverpool came in the club's historic first European tie at Anfield, against Reykjavik in September 1964, despite not having played in a single league match during the whole of the previous season.

Alan had passed his 30th birthday by a few days when he moved to Tranmere and was perhaps unlucky to just miss out on the glory days which were around the corner, having to settle for a Second Division championship medal as his only major honour with the club.

He had just begun to establish himself as a first-team regular when the club was relegated in 1954 but missed only a handful of games over the next eight seasons before promotion was finally achieved back into the top flight.